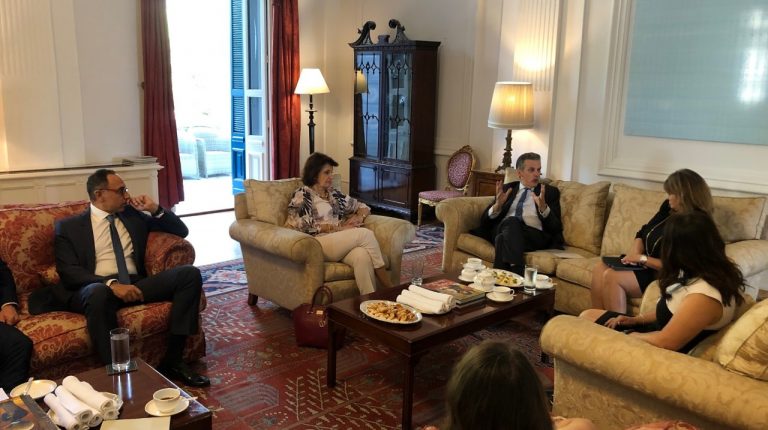 The British Embassy in Cairo and the British Egyptian Business Association (BEBA) signed, on Sunday, a Code of Ethics for combating sexual harassment and all forms of violence against women in the Workplace.

The Code of Ethics, developed by the Top 50 Women Forum and Egypt’s National Council for Women (NCW), provides a clear definition of harassment as well as practical guidelines on how to prevent it. It aims to give women an equal opportunity to work and operate freely in a safe and secure space.

Among the first to support and adopt the code were Egypt’s Ministry of Planning and Economic Development and the Financial Regulatory Authority (FRA). The move on the part of both entities is set to encourage other companies and institutions to join the code as well, given the significance of this cause.

Women’s empowerment and gender equality are top of the UK’s agenda, and the British Embassy in Egypt has been supporting British businesses to enforce such policies in their work environment.

The embassy recently celebrated the British company, Vodafone, being awarded the Gender Equity Seal by the NCW, a close partner of the UK on this issue.

It has also provided funding to Start Egypt, a pre-acceleration incubation programme that helps start-ups develop established business models in the field of social impact. This includes a hackathon aimed to present innovative technological solutions to combat violence against women.

British Ambassador to Egypt Sir Geoffrey Adams said, “It is a great honour for the British Embassy to support the Code of Ethics for Combating Sexual Harassment and all Forms of Violence Against Women in the Workplace – and indeed, to sign up ourselves.”

“There should be zero tolerance for harassment, and I am particularly proud that BEBA is keen to promote this agenda amongst British businesses in Egypt,” he added, “One of the UK’s key priorities is women’s empowerment and creating a safe environment for women to thrive, both within work and outside it.”

Adams also noted that the NCW and the Top 50 Women Forum have shown really encouraging leadership on this issue, and that he looks forward to other companies in the private sector following suit and joining the initiative.

BEBA Chairperson Khaled Nosseir said, “BEBA is honoured to be one of the first associations adopting the Code of Ethics for Combating Sexual Harassment and all Forms of Violence Against Women in the Workplace.”

“We believe it’s a matter of great importance for the continued development of the Egyptian work environment,” he added, “I would like to congratulate the Top 50 Forum and the National Council for Women for their great efforts in developing this Code of Ethics, and would like to thank the Ministry of Planning and Economic Development and the FRA for supporting and endorsing this cause and encouraging all institutions to adopt policies, raise awareness, and set mechanisms and channels to create an environment with zero tolerance for harassment.”

Dina Abdel Fattah, media figure and founder and head of the forum, said that the code of ethics was prepared as part of the “You are Strong” campaign launched and adopted by the Top50 Women Forum.

The code aims to criminalise sexual harassment, discrimination, and violence against women in the workplace, and to create a safe work environment for women.

This aims to maximise women’s contributions to the sustainable economic development of Egypt within the framework of the economic, political and social empowerment schemes that the state aims to implement.

She also noted that the signing of the code of ethics with the British Embassy and BEBA is the beginning of efforts to generalise the code in all workplaces in Egypt built on Egyptian-British investments. This also represents a major shift in the implementation of the code in Egypt.