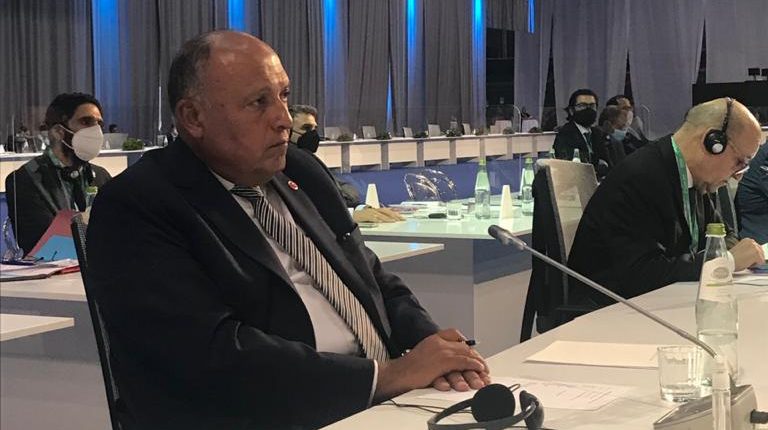 Egypt’s Minister of Foreign Affairs Sameh Shoukry has said that foreign interference in Syria needs to come to an end as a condition for lasting peace in the country.

During the meeting, Shoukry reviewed the protracted Syrian crisis, and the resulting control of terrorist groups over some areas in the country. This was in addition to the suffering of refugees and displaced persons in light of the difficult economic situation.

Some regional powers have occupied parts of Syria under the pretext of defending allies or fighting terrorism, the minister said.

He noted that these forces have imposed demographic changes, supported extremism, exacerbated sectarian tensions, and transferred mercenaries and fighters to other conflict areas outside Syria.

Shoukry indicated that the international community must quickly put an end to the crisis through a political solution based on Security Council Resolution No 2254.

He stressed the need to support the efforts of the UN Special Envoy for Syria, Geir Pedersen, in order to reach tangible results and to end the suffering of the Syrian people.

The minister also stressed that progress must be achieved in the political track to contribute to Syria’s return to its normal regional and international status.

Shoukry pointed out that a solution to the Syrian refugee crisis will remain elusive as long as there is an absence of Syria’s unity with prolonged instability. He called on the international community to continue supporting Syrian refugees and those countries hosting them.

He concluded his speech by noting that the time has come to end the long-term suffering of the Syrians, and contribute to saving the country for the sake of future generations.