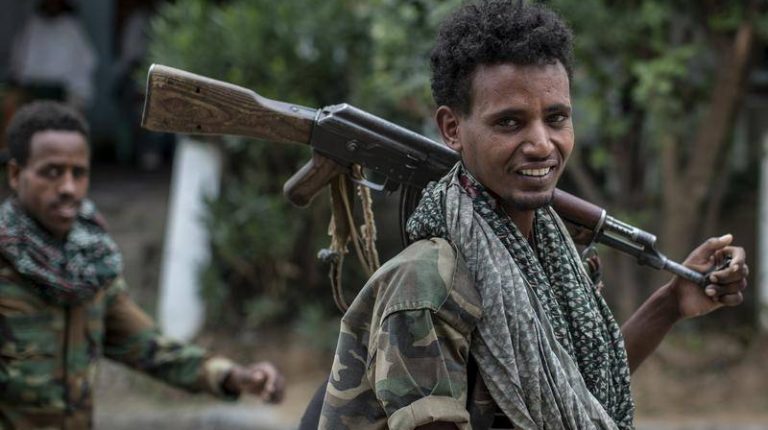 The developments marked a dramatic turn in a conflict that has killed thousands of people, displaced more than 2 million, and pushed hundreds of thousands to the brink of famine.

The Ethiopian government said it was declaring a ceasefire following a request from the interim regional administration in Tigray, which Addis Ababa appointed after ousting TPLF forces last year.

All parties to the conflict have been accused of mass killings and human rights abuses. The United Nations (UN) says more than 5 million people are in urgent need of food aid, and 350,000 people are at risk of starvation.

Monday’s reports said that Tigrayan fighters, who launched a new offensive last week, forced the transitional administration in the province to withdraw from Mek’ele.

Getachew Reda, Spokesperson for the TPLF, said that the city is now under the group’s control. Several residents in Mek’ele said that they were celebrating the departure of federal forces.

The Ethiopian Government has not yet commented on reports that its soldiers were forced to withdraw.

UN Secretary-General Antonio Guterres, who called Ethiopian Prime Minister Abiy Ahmed on Monday, said it was “essential to protect civilians, deliver humanitarian aid to those who need it, and find a political solution”.

Guterres had earlier expressed his hope that Ahmed would take the decision to implement a ceasefire.

Ethiopia’s central government launched an offensive in Tigray last November to oust the then-ruling TPLF party, who had control in the region.

There was a major dispute between the party and the Prime Minister over political changes in the country, which is based on the federal system of government on the basis of ethnicity.

One of the most important motives behind the Ethiopian Government’s decision to launch its attack in the region was the control of the TPLF over the military bases in the region. The TPLF joined other armed groups in the region with the aim of forming the Tigray Defense Forces.

Ahmed had announced at the end of last November that the conflict had come to an, but the fighting continued despite these statements.

On 10 June, the UN described the situation in northern Ethiopia as akin to a famine. A study, conducted with the international organisation’s support, revealed that 350,000 people are in “crisis” in the war-ravaged region.

According to those UN estimates, the situation in terms of food supplies availability has reached the extent that can be described as “catastrophic”. This is the same description used by the international organisation to describe famine and death affecting small groups of people in large areas.

The World Food Program, the Food and Agriculture Organization (FAO), and the United Nations Children’s Fund (UNICEF) have called for urgent action to deal with this crisis.

However, the Ethiopian Government has not given its support to this analysis on which international studies and estimates were based, and has denied that there is famine in the country.

Meanwhile, the US, Ireland, and the UK have requested an emergency public session of the UN Security Council on Tigray, according to diplomatic sources.

The sources suggested that the council would hold this emergency session on Friday. Since the outbreak of the conflict in Tigray in early November, the West has never succeeded in convening a UN Security Council plenary session on the northern Ethiopian region.