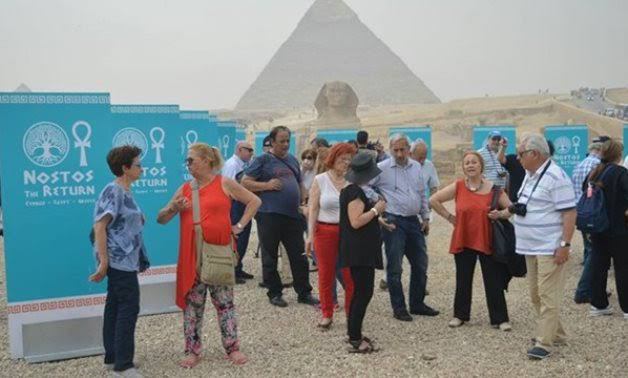 Egypt’s Minister of Emigration and Egyptian Expatriates Abroad Nabila Makram has announced the schedule of visits for the fourth edition of the ‘Nostos -The Return’ initiative, which will be launched this month.

Makram said that this latest edition will be held in the presence of the Greek and Cypriot Ambassadors in Egypt. It was agreed upon in coordination with Greece’s Deputy Minister for Diaspora Greeks Konstantinos Vlasis, and Cyprus’ Commissioner for Humanitarian Issues and Overseas Cypriots Fotis Fotiu, to incorporate tourism, history, arts, and culture among other fields.

The events will include visits to several important sites in Egypt, such as the Library of Alexandria, and other sites of importance to the Greek community in Alexandria. This is in addition to a meeting with Pope Theodoros II, who leads the Coptic Orthodox Church.

Also included in the trip are a visit to the Suez Canal and Greek-interest sites in Ismailia, as well as the Pyramids of Giza, the Egyptian Parliament, and the National Museum of Egyptian Civilization (NMEC) in Cairo.

Makram said that this edition of Nostos has been allocated for youth, and targets second and third generation Greeks and Cypriots who once lived in Egypt. The initiative was launched in April 2018, with the participation of 250 individuals from the Greek and Cypriot communities that lived in Egypt.

The initiative comes as a part of the diaspora programme signed between Egypt, Cyprus and Greece. It aims to gather Cypriots and Greeks or their descendants in Alexandria for a return trip to the place where they or their ancestors once lived.

Signing this programme is considered by many to be a historic moment for the three countries, since it was the first time that cooperation on diaspora was achieved. It was also the first time that the three countries decided on a common strategy and joint actions. The initiative also aims at promoting Egyptian tourism through the launch of these events.

The first edition included visits to the places in which their families used to live, such as Zizinia and El Raml neighbourhoods in the Mediterranean seaport city of Alexandria. This was followed by a visit to the Greek Orthodox Patriarchate of Alexandria and All Africa, a tour of the Giza Pyramids, and finally a visit to Saint Catherine’s Monastery.