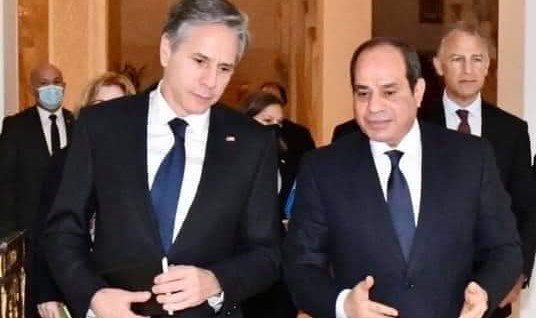 Egypt and the United States have been associated with close strategic relations over the past four decades. The US has its leading role in all global and regional issues, while Egypt has its pivotal role in the Middle East, Africa, and the Muslim world.

US-Egypt relations have gone through several stages. Before the 1952 revolution, Egypt hosted on 22 November 1943 the “1st Cairo Conference” launched by US President Franklin Roosevelt with the participation of British Leader Winston Churchill and Chinese leader Chiang Kai-shek.

Under the former president Gamal Abdel Nasser, the bilateral relations were characterised by tension and conflict. The peak of this tension was in 1967 which resulted in cutting the diplomatic relations between the two countries.

In March 1974, relations between Egypt and the US resumed after the signing of the Camp David Accords and the Egyptian-Israeli peace treaty. In June 1974, US President Richard Nixon visited Cairo in the first official visit by a US president.

After eight years of tension, US President Obama visited Cairo in 2009 heading a US delegation where he delivered a famous speech from Cairo University to the Muslim world.

The US announced its support for the 25 January 2011 Revolution, while some official US institutions expressed their reservation at the beginning of the 30 June Revolution.

In June 2014, Obama phoned President Abdel Fattah Al-Sisi to congratulate him for being sworn in as Egypt’s new president for the coming four years.

As Joe Biden assumed power, a new chapter of Egyptian-American relations has started. Egyptian-US coordination has always been standing in all issues of the region, especially in the Palestinian issue and the situation in Libya, Syria, Iraq, and Iran, as well as combating terrorism.

During his visit to Cairo in May, US Secretary of State Antony Blinken affirmed the strong strategic partnership between the United States and Egypt, and President Biden’s commitment to this relationship. He reiterated the United States’ commitment to Egypt’s water security and to the urgent resumption of substantive and results oriented negotiations under the leadership of the African Union to resolve the dispute over the Grand Ethiopian Renaissance Dam (GERD).

The Secretary praised Egypt for its efforts on Libya and noted our mutual support for the Government of Iraq.

One important aspect of the Egyptian-American relations is the trade and investments, which have been rooted for over the last four decades. Since that time, the two countries have sought ways to increase their economic and trade ties, notably through various partnerships and agreements. At the beginning of the 1990s, negotiations for a free trade agreement were a topic of discussion, but no comprehensive conclusions could be reached. Egypt and the US finalised a Trade and Investment Framework Agreement (TIFA) in 1999.

The agreement between Egypt, the US, and Israel was signed in 2005, granting duty-free entry to the US for products jointly manufactured by Egypt and Israel. Originally, QIZ products had to have 11.7% of their content comprised of Israeli inputs in the form of labour and/or material, but as of January 2008, the minimum content requirement was reduced to 10.5%.

In 2020, US firms invested $1.5bn in Egypt, making the United States the fifth-largest source of foreign direct investment (FDI) in Egypt last year.

As the US embassy in Egypt celebrates the Independence Day, Daily News Egypt is honoured to shed light on the diversified aspects of cooperation between both countries in a special edition.