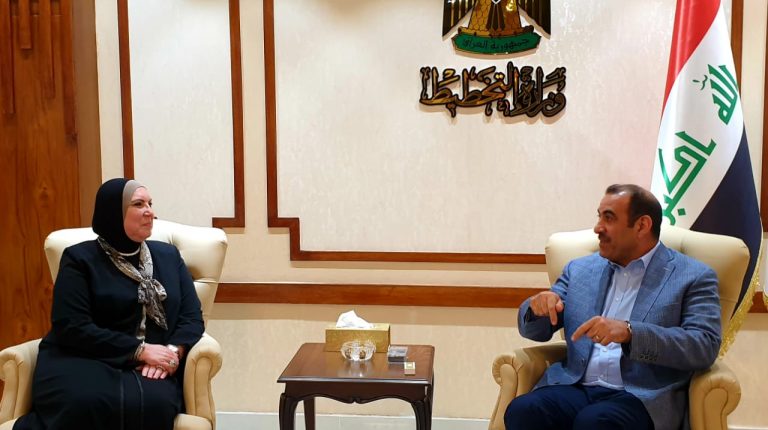 Egypt’s Minister of Trade and Industry Nevine Gamea has held talks with Iraq’s Minister of Planning Khalid Najim to discuss means of tripartite economic integration between the two countries and Jordan.

Gamea also confirmed that the foundation of an economic city on the borders between Iraq and Jordan represents a focal point for starting the implementation of decisions taken during the presidential summit hosted by Baghdad last week.

The minister said that the summit aimed to achieve economic integration between Egypt, Iraq, and Jordan.

She expressed the Egyptian government’s keenness to provide its expertise to establish and manage industrial zones and complexes. This is with the aim of establishing industrial partnerships between business communities in the three countries.

Gamea noted the importance of benefiting from the consensus of visions between leaders of the three countries, to achieve a qualitative leap in strategic economic relations. This will benefit and serve the interests of the peoples of Egypt, Iraq, and Jordan.

The minister’s remarks came at the conclusion of her recent trip to Iraq, during a session of expanded talks held with Najim, who is also the coordinator of the tripartite cooperation in the Iraqi government.

The meeting tackled the future of economic cooperation between the two countries, and a number of economic files of common interest.

Gamea said that the meeting also dealt with a discussion of activating joint action between Egypt, Iraq, and Jordan. This aims to accelerate the implementation of development projects agreed upon between the political leadership in the three countries.

In addition to this, a comprehensive action plan was agreed upon with specific timing and goals, to achieve the desired cooperation and build partnerships between the private sectors in Egypt, Iraq and Jordan.

The meeting also saw discussions on ways to enhance joint bilateral cooperation between Egypt and Iraq, especially in the field of developing industry and increasing intra-trade.

This would see a strengthening of the partnership relations between the Egyptian and Iraqi private sectors, to start implementing joint production and investment projects. In addition, this would help enhance cooperation in the field of developing micro, small, and medium enterprises (MSMEs).

Gamea said that Egypt is fully prepared to provide its expertise in this field, especially since MSMEs sector represents more than 90% of the country’s economy. There is also the possibility of exchanging experiences in the field of handicraft products, for which the two countries are famous.