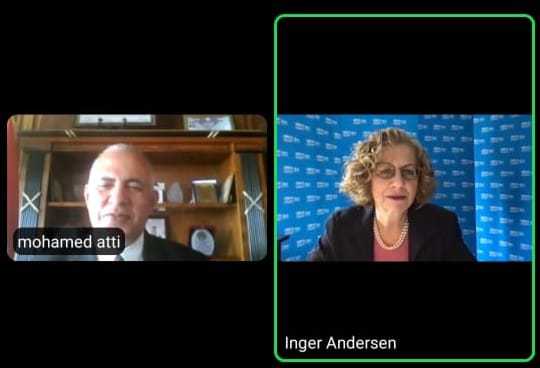 During the virtual meeting, on Tuesday, Abdel Atty reviewed the water situation in Egypt, and the level of the challenges the country’s water sector faces.

This particularly relates to the limited water resources, the negative impacts of climate change, and the unilateral measures taken by the Ethiopian side regarding filling and operating the Grand Ethiopian Renaissance Dam (GERD).

The minister noted that Egypt is one of the driest countries in the world, and suffers from a lack of water resources at a time when Ethiopia enjoys huge water resources. The latter has achieved this through rainwater, renewable groundwater, and river basins other than the River Nile, along with the large quantities of water it has stored in dams and natural lakes.

He further stressed that his country is not against development in Ethiopia or other Nile Basin countries. He noted, however, that development projects must be implemented in accordance with the international law, taking into account the concerns of the downstream countries.

Abdel Atty said that Egypt has already assisted other Nile Basin countries in building dams in a cooperative and consensual framework.

He added that Egypt seeks to achieve cooperation with Ethiopia through a fair and legally binding agreement to fill and operate the controversial dam, in a manner that preserves the interest of all involved parties.

He also noted that Egypt has shown flexibility in negotiations, which have been met with intransigence from the Ethiopian side. This is given that Ethiopia does not have the political will to reach an agreement, and it always seeks to evade any obligation towards the downstream countries.

For her part, Andersen said that the UN Secretary-General Antonio Gutteres expressed the UN’s readiness to cooperate with the African Union (AU) to support the negotiations “if requested by the three countries”.

Both Egypt and Sudan have previously requested the involvement of other parties to advance the negotiations path on the dam, including the UN, the European Union (EU), the (US), although Ethiopia has rejected the proposal.

The filling saw Sudan suffer from a severe drought followed by severe flooding, due to proceeding to the first filling process without coordination with the downstream countries.

Moreover, in November 2020, Ethiopia released huge quantities of silt water without informing downstream countries, which caused an increase in turbidity at drinking water stations in Sudan.