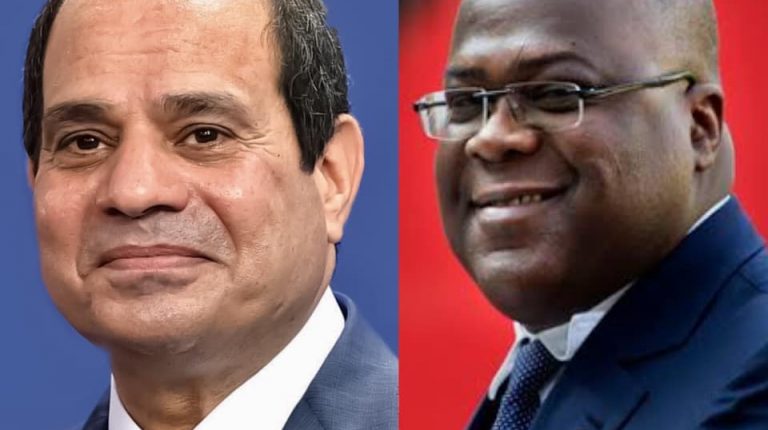 In a phone call with his counterpart, Al-Sisi stressed that Au-led talks faltered due to Ethiopia’s desire to impose a fait accompli on the two downstream countries.

According to an official statement by the Egyptian Presidency, Al-sisi affirmed his appreciation of the efforts by his Congolese counterpart, who is the current head of the AU, towards reaching a fair agreement over the filling and operation of the Blue Nile dam.

Tshisekedi stressed that Egypt-Sudan move at Security Council would support efforts for African solutions to African problems, reaching agreement between the three countries.

He praised Cairo’s efforts on well-balanced, fair agreement on dam that accounts for interest of Egypt, Sudan, and Ethiopia.

On Monday, Egyptian and Sudanese Ministers of Foreign Affairs have expressed their “categorical” rejection of Ethiopia’s announcement that the second filling of GERD has started.

Egypt’s Foreign Minister Sameh Shoukry met his Sudanese counterpart Maryam Al-Sadiq Al-Mahdi said, in a joint statement, that the Ethiopian move constitutes an “explicit violation” of the provisions of 2015 Declaration of Principles Agreement.

The meeting took place in preparation for the United Nations (UN) Security Council session, which is scheduled for this coming Thursday, and comes at Egypt and Sudan’s request.

The joint statement added that the two ministers agreed on the need to continue intensive contact and consultations with the UN Security Council’s member states, to urge them to support Egypt and Sudan’s position.

The ministers demanded that a legally binding agreement is reached on filling and operating the controversial Ethiopian dam. This agreement would take into account the interests of the three countries, and preserve the rights of the downstream countries from the damage this project will have on Egypt and Sudan.

“The second filling constitutes a violation of international laws and norms governing the exploitation of the resources of transboundary rivers,” the two ministers stressed.

“It represents a dangerous escalation that reveals Ethiopia’s bad faith and its desire to impose a fait accompli on the two downstream countries, and its indifference to the negative effects and damage that its interests may suffer due to the unilateral filling of the dam,” they added.