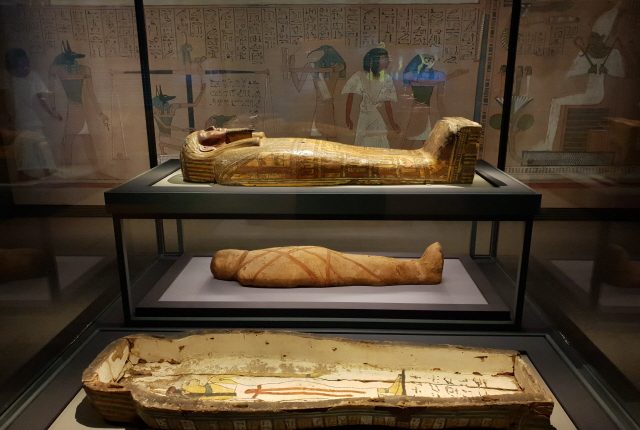 Cultural exchange between Egypt and South Korea is the essence for developing the two countries’ common aspirations, according to Hong Jin-wook, South Korea’s Ambassador to Egypt.

Thanks to the popularity of Ancient Egyptian antiquities which have dazzled millions of South Koreans, the National Museum of Korea decided to extend the exhibition, Hong said. It was initially inaugurated in December 2019, and will now be extended until March 2022.

The Egyptian section, the first of its kind, is a part of the World Cultures Gallery. It displays 94 Ancient Egyptian treasures and artefacts, including a 2,700-year-old mummy and coffin.

The exhibition, which was scheduled to run until 7 November 2021, has attracted many visitors who enjoyed viewing the artefacts and their symbols that present tales of life, death, and rebirth. Museum visitors soared by more than 30% after the opening of the Egyptian section

Due to the novel coronavirus (COVID-19) pandemic, the museum has been closed for a month. As an alternative to in-person visits, the museum has launched a virtual exhibition for the Egyptian section to enable many people to view the artefacts online.

Ambassador Hong emphasised the two-way cultural exchange between Egypt and South Korea, which plays a leading role to a greater understanding between the peoples of the two countries.

“Egyptians are currently enjoying the cultural activities held by the Korean Cultural Center in Egypt, including K-POP, film screenings, Korean cuisine, and Korean language courses, while many Koreans are seeking to explore the grandeur and glory of the Ancient Egyptian civilisation,” Hong said.

He added that despite the geographical distance between Egypt and South Korea, the cultural exchanges between the two countries have maintained rapid development.

The ambassador also pointed out that the South Korean Embassy will soon run a survey to gather information on Korea’s image in the eyes of Egyptian people.

“This meaningful survey will allow us to gain valuable insights and clear feedback from the Egyptian people on how we further strengthen our bilateral relations,” the ambassador added.