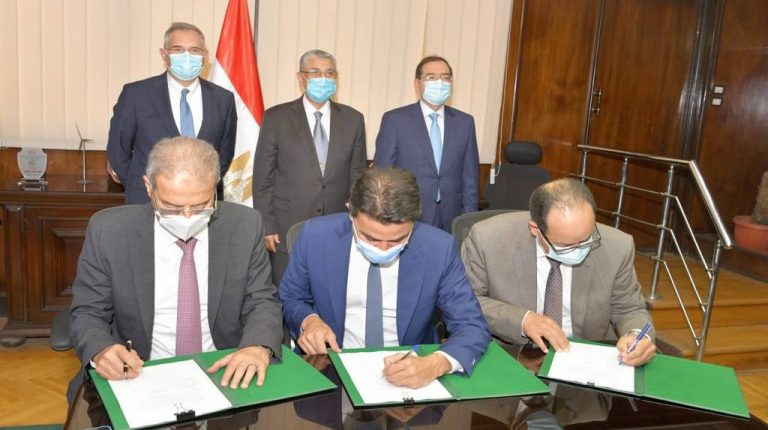 The MoU will see the three companies cooperate green and blue hydrogen production, and to assess the technical and commercial feasibility of the targeted production projects in Egypt.

According to a statement by Egypt’s Ministry of Petroleum and Mineral Wealth, on Thursday, this comes as part of the Egyptian state’s strategy to enter this field strongly through new projects.

These come in accordance with the country’s strategy aimed at diversifying sources of energy production, optimal use of natural resources, and providing multiple clean energy sources.

Under the protocol, cooperation will take place through conducting a study on joint projects for the production of green hydrogen using electricity generated from renewable energy sources. It includes the production of blue hydrogen by storing carbon dioxide in aging natural gas fields.

Tarek El Molla, Minister of Petroleum and Mineral Wealth, said that the speedy signing of the cooperation protocol aims to assist in taking the necessary executive steps for projects to produce hydrogen as a clean fuel. These will take place in cooperation with major international companies, to invest in Egypt’s potentials in this field.

Meanwhile, Mohamed Shaker, Minister of Electricity and Renewable Energy, highlighted the importance of the Egyptian state’s support and the existing cooperation to find a national strategy for producing and benefiting from green hydrogen.

He noted that Egypt has tremendous opportunities to generate electricity from renewable energy sources, and that it seeks to exploit this economically and to enter and compete strongly.

In turn, Alessandro Politi, CEO of Natural Resources Activities at Eni, said that the signing is part of Eni’s efforts to reduce emissions by 2050.

He also said that this falls in line with Egypt’s strategy to move towards and diversify the energy mix used, whilst developing hydrogen production projects in cooperation with major international companies.