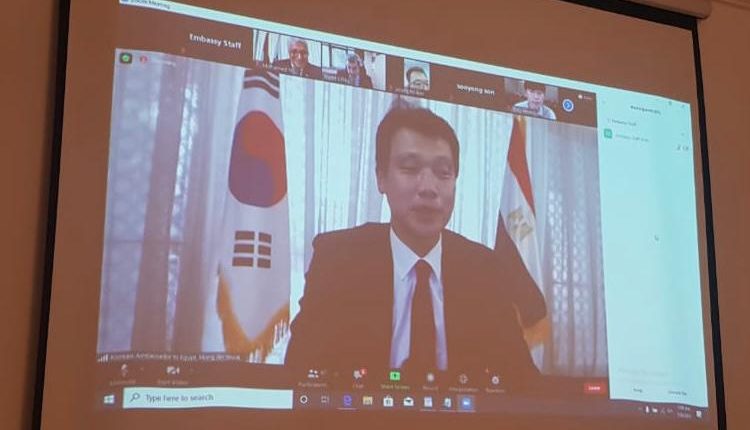 South Korea’s Ambassador to Egypt Hong Jin-wook has said that there are ongoing discussions between Egypt and his country, to initiate a feasibility study on an economic partnership agreement between the two countries.

He said that these discussions come in recognition of the importance of facilitating trade and investment between the two countries.

He pointed to the South Korean Government’s decision to designate Egypt as a core priority country for Official Development Assistance ODA for the coming five years, from 2021-2025. This will help expand the mutually beneficial synergy between the business communities in both countries.

Ambassador Hong said that the horizons for the partnership between South Korea and Egypt can be broadened through trilateral cooperation, so that the two countries can jointly advance into other markets. This will take place with products combining South Korean technology and Egypt’s local manufacture.

The ambassador’s remarks came during an awareness webinar on conducting business in Egypt, organised by the Korean Chamber of Commerce and Industry (KCCI) and the Egyptian Business Association (EBA).

Over 40 Korean companies working in diverse sectors joined the webinar, along with representatives from Egypt’s Industrial Development Authority (IDA) and the General Authority for Investments and Free Zones (GAFI).

In his opening remarks, Hong emphasised the tremendous potential available for the South Korean business community in Egypt.

He noted that Egypt is South Korea’s main investment destination in Africa, with major Korean companies successfully operating in Egypt and exporting Egyptian products. As a result, they are creating win-win cooperation between the two countries.

Hong also said that there is more to be done to boost bilateral economic ties, and highlighted the ongoing discussions to localise the railway industry in Egypt. This will take place in collaboration between Hyundai Rotem Company and the National Egyptian Railway Industries Company (NERIC).

The ambassador pointed out that this cooperation will not only allow South Korea to share its expertise and technology with Egypt. It will also help Egypt become a hub for rail cars exports to the region, contributing as well to more job creation and improving Egyptian citizens’ quality of life.

He emphasised the pivotal role that the two business communities can play in boosting bilateral cooperation, whilst taking advantage of the friendly legal and institutional environment that both governments are working on to establish.

Hong also expressed his hope that the webinar can be a good opportunity for exchanging views and opening up new avenues for successful partnership between South Korea and Egypt.

For his part, Taehee Woo, Vice-Chairperson of the KCCI, said that his organisation is working to push forward cooperation and keep the momentum of bilateral cooperation. He said that Egypt is creating a favourable environment for businesses with its bold economic reforms.

Woo added that this awareness webinar will help South Korean businessmen better understand the developments in the Egyptian market.

Joo Si-Bo, Chairperson of the Korea-Egypt Business Council, stressed the need to remove trade barriers and unnecessary regulations that hinder international cooperation whether at the bilateral or the multilateral levels. This cooperation is becoming increasingly important with the global pandemic.

Khaled Nosseir, Chairperson of Egypt-Korea Business Council, delivered a speech on behalf of the Chairperson of the Egyptian Businessmen Association (EBA). Nosseir expressed the keenness to offer the support needed for South Korean businesses interested in cooperating with Egypt.

This would also be extended to Egyptian businessmen, to assist in facilitating their businesses towards fostering the economic relations between Egypt and Korea and promote business cooperation.