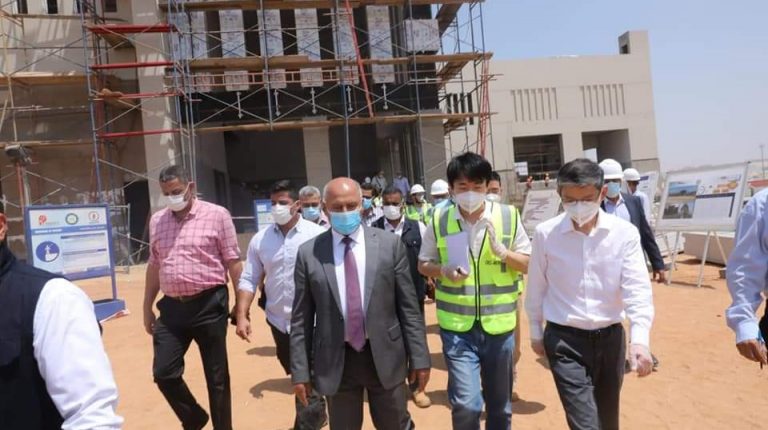 Egypt’s Minister of Transportation Kamel El-Wazir and the Chinese Ambassador to Egypt Liao Liqiang have inspected the LRT electric train project, accompanied by representatives from the National Authority for Tunnels (NAT).

The line is currently being constructed to connect Al-Salam City, the New Administrative Capital (NAC), and the 10th of Ramadan City.

The two sides held an extensive meeting with officials from the Chinese alliance of Afik and Creek, the main contractor for the project development. This took place in the presence of the Egyptian companies carrying out construction work on the project, and covers stations, bridges, tunnels, railways, and fence works.

El-Wazir highlighted the speed of supplying electromechanical equipment, with the NAT testing them in preparation for their installation.

The minister said that the rate of implementation at the mobile unit works has reached 55%, and that a daily coordination meeting is held between the Egyptian and Chinese project implementers.

The meeting takes place in the presence of the project consultant and the project manager, to push implementation rates to speed up the completion of the trial operation. This is also to ensure that the official opening of the first and second phases takes place at the specified times.

Additionally, the project also includes three tunnels that have been 100% completed, in addition to a car tunnel at Capital Gardens city and two tunnels for the train track covering New Heliopolis and Badr City.

The total implementation rate of the construction works for the first and second phases reached 90%.

El-Wazir also inspected railway works, whose completion rate has reached 46%, followed by a review of the project’s third phase implementation. This includes stations covering the NAC 3,  Sport City, and the Strategic Leadership and Central Interchange Station, which will feature a fast electric train.