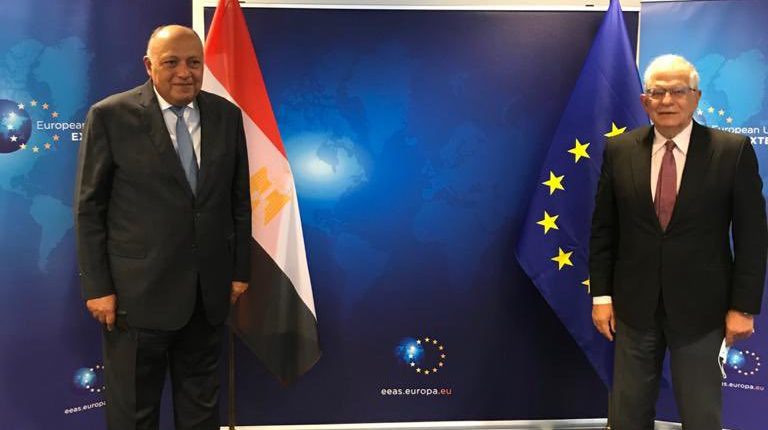 The meeting came as part of Shoukry’s ongoing visit to the Belgian capital, Brussels.

Ahmed Hafez, Spokesperson for Egypt’s Ministry of Foreign Affairs, said that Shoukry and Borrell stressed the strategic nature of Egypt’s relations with the EU.

He highlighted the importance of these relations, in light of the increasing common regional and international challenges, and the great opportunities available for cooperation between the two sides.

The two sides agreed to activate all existing cooperation mechanisms as part of the Egyptian-European Partnership Agreement. They also held an in-depth discussion and an exchange of views on all regional issues of common interest.

Shoukry presented Egypt’s vision aimed at resolving crises, in order to restore stability and achieve prosperity for the peoples of the region, with the situation in Libya one of the foremost topics under discussion.

Shoukry praised the interest of Belgian companies in participating in Egyptian development plans, especially in infrastructure and renewable energy projects.

The importance of developing cooperation in combating antiquities smuggling was also discussed, in addition to working to restore tourism from Belgium. This is in light of the strict measures applied to combat the spread of the novel coronavirus (COVID-19) in Egyptian tourist destinations.

Shoukry presented the continuous national efforts on several fronts to advance the human rights situation and Egypt’s success in combating illegal immigration. This is in addition to highlighting Egypt’s hosting of about 6 million immigrants and refugees.

The meeting also touched on a number of regional issues and files of common interest at the international level, such as the developments in the Palestinian cause and the GERD file.