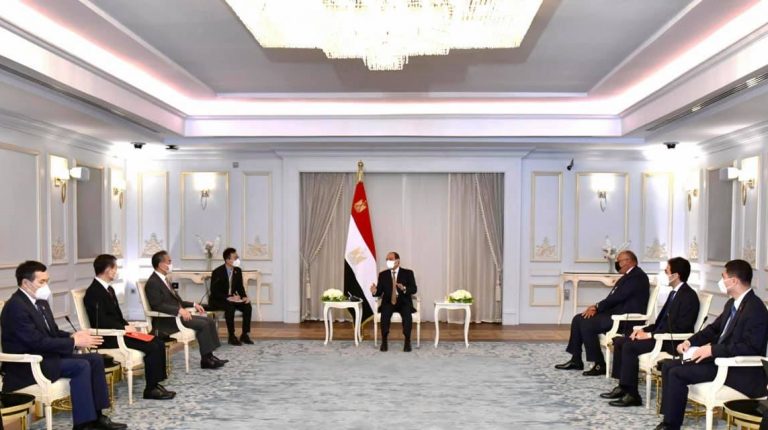 Egyptian President Abdel-Fattah Al-Sisi has received, on Sunday, Chinese Minister of Foreign Affairs Wang Yi and affirmed his country’s keenness to advance the comprehensive strategic partnership that brings Egypt and China together.

Al-Sisi pointed out that this year coincides with the 65th anniversary of the establishment of Egyptian-Chinese diplomatic relations.

The bilateral relations have witnessed an extended path of cooperation and coordination between the two countries in various fields. They also benefit from the Chinese experience, which is a success story that the world seeks to study with the aim of advancing overall development.

For his part, Wang conveyed a verbal message from President Xi Jinping, which included China’s affirmation of the continued development of its strategic relations with Egypt.

The minister pointed out China’s respect and appreciation for Al-Sisi and Egypt in its pivotal role as a fundamental pillar of stability in the Middle East region. He reiterated China’s support for Egypt in comprehensive development efforts, combating terrorism, and achieving security and stability in the region.

Regarding the strengthening of bilateral cooperation relations between the two countries at the international level, Wang clarified the acceptance of Egypt’s accession as a dialogue partner in the Shanghai Cooperation Organization. This deals with coordination and cooperation in the fields of combating terrorism and extremism, energy and science.

The meeting witnessed a review of prospects for enhancing aspects of bilateral cooperation between the two countries.

The two sides praised the coordination that has taken place at the highest levels since the outbreak of the novel coronavirus (COVID-19) pandemic. It led to the signing of the joint manufacturing agreement for the Chinese-developed Sinovac vaccine in Egypt.

This supports the national strategy for the localisation of the pharmaceutical and vaccine industry in Egypt.

Al-Sisi expressed his aspiration to continue the fruitful cooperation between the two countries at all levels, in an effort to strengthen international efforts during the pandemic.

The President also stressed Egypt’s keenness to benefit from China’s expertise in supporting development programmes, activities, and national projects in the country. This is especially in light of the modern infrastructure that Egypt now enjoys, which is integrated with China’s Belt and Road initiative.

Al-Sisi also referred to the important role played by the Chinese-Egyptian Economic and Trade Cooperation Zone in the Suez Canal Economic Zone (SCZone), as a successful model for investment cooperation between the two countries.

During the bilateral meeting, the two sides also discussed the latest developments in the Grand Ethiopian Renaissance Dam (GERD) issue. Al-Sisi reiterated Egypt’s firm position to preserve its water security, represented by its historical rights to River Nile waters. This will take place through reaching a binding legal agreement to fill and operate the Dam that achieves the interests of all in a fair manner.

Wang made clear his country’s full understanding of the River Nile’s utmost importance to Egypt, and highlighted China’s continued interest in finding a solution to this issue in a manner that meets the interests of all parties.

Shoukry reviewed Egypt and Sudan’s position, as the two downstream countries, which highlights the need to preserve the interests of all parties. The two countries are also keen to highlight the need for no harm to their water security to take place.

He noted the importance of engaging in enhanced negotiations, under the auspices of the African Union (AU). This aims to reach a binding legal agreement to fill and to operate the controversial dam, whilst taking into account the interests of all parties.

Shoukry stressed the importance of China’s position on this issue, which has a significant impact on Egypt’s interests and national security.

The two sides exchanged in-depth views on the Palestinian issue as a central issue in the Middle East. This requires a comprehensive, just, and lasting solution to it, within the framework of compatibility with all references and resolutions of international legitimacy.

Earlier on Sunday, a round of political talks were held, chaired by Shoukry and Wang,

where the two sides emphasised their countries’ commitment to the comprehensive strategic partnership.

After the talks, the two sides signed an agreement to establish the Intergovernmental Cooperation Committee between Egypt and China. The committee constitutes one of the frameworks concerned with guiding, evaluating, and reviewing the course of cooperation relations between the two countries in various fields and at various levels.

The Egyptian side expressed its appreciation for the assistance, research, and information provided by various Chinese agencies and authorities, to support its efforts to confront the COVID-19 pandemic.

The two ministers referred to the fruitful coordination in facilitating the purchase of vaccine doses against COVID-19.

They also highlighted the efforts that culminated in the launch of the Sinovac company’s vaccine packaging and production line for the COVID-19 virus at Egypt’s Holding Company for Biological Products and Vaccines (VACSERA) company.

The talks allowed for the ministers to touch on all regional and international situations of common interest.