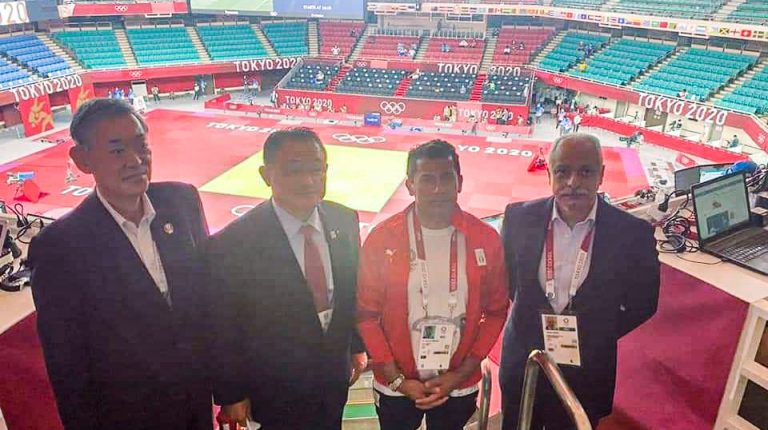 The meeting took place on the sidelines of the Tokyo Olympics, which officially commenced on Friday, where Sobhy hailed on Saturday the efforts made by Japan’s Olympic Committee for organising the event.

The minister expressed his appreciation for all the procedures and arrangements taken by Japan for providing accommodation and training for the Egyptian delegation participating in the Olympics.

He presented the Egyptian national project adopted by his ministry to sponsor and train talented youth in different sports, as well as presenting the ministry’s vision towards providing judo training across Egypt.

Sobhy invited Yamashita to visit Egypt to review the development of the country’s sports infrastructure as part of the fruitful cooperation between the two countries in the field of sports.

Moreover, Yamashita expressed his appreciation for the development of Egyptian sports and the efforts to consolidate relations in the field between the two countries during the coming period.

Yamashita also asserted that he was inspired by the nobility of Egyptian Olympic athlete Mohamed Rashwan and his influential role in the international community in general and the Japanese in particular.

In 1984 Olympics, Rashwan lost the finals to Japan’s Yasuhiro Yamashita, who tore a right calf muscle in the preliminaries. Rashwan stated that he did not aim for Yamashita’s right leg because he did not regard that as a fair play, and was subsequently given an award from the International Fair Play Committee.

Yamashita said that Rashwan’s influence is not only on the athletic level, but also on the human level.

As a two-time world silver medallist, the Egyptian judoka exuded the sport’s core values of honour, respect, and integrity. He was a multiple world military champion and Mediterranean Games winner.

The opening ceremony for the 2020 Tokyo Olympic Games was held on Friday without the usual mass choreography, amid the novel coronavirus (COVID-19) pandemic.

About 11,000 athletes from 204 countries are taking part in the games, which will run until 8 August, along with a team of refugee athletes competing under the Olympic flag.