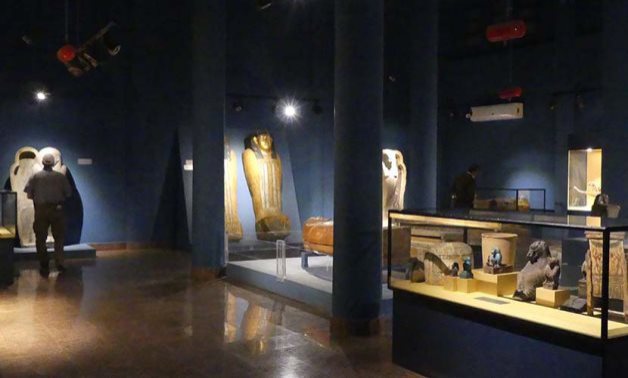 The Mallawi Museum in Minya governorate organised, last Thursday, a workshop for children, to teach them the method of creating pencil cases in the shape of a lamb from environmentally friendly materials.

The workshop, which took place as part of the museum’s celebrations to mark the Eid Al-Adha holidays, also aimed to teach children how to recycle sheep’s wool and its various derivatives.

The Mallawi Museum is one of the most prominent archaeological facilities in Minya. It was inaugurated on 23 June 1962 during the era of late President Gamal Abdel Nasser, but was closed after being vandalised and looted in August 2013 by the outlawed Muslim Brotherhood.

The result of that attack was the destruction of 50 pieces due to the violence that followed the dispersal of the Rabaa Al-Adaweya and Al-Nahda sit-ins.

However, under President Abdel Fattah Al-Sisi, the Egyptian state was able to bring it back to life. Prior to its looting and destruction in 2013, the museum contained approximately 1,092 artefacts from different historical eras.

Archaeologist Sameh Ahmed Abdel Hafeez, an employee at the museum, was killed while he was on duty during the attack on the museum in 2013.

The Ministry of Tourism and Antiquities undertook work in full swing to bring the pieces back to life. The relics were transferred to the museum store in Ashmonin, and the processes of re-sorting the remains, pottery fragments, and other monuments of stone, marble, wood and plaster began.

After three years, the museum was opened again, on 22 September 2016, which is considered a victory for the Egyptian state over chaos and terrorism.

The process of restoring the museum cost the state EGP 11m, with Minya providing EGP 7.15m of its public funds. That is in addition to an Italian grant worth EGP 4m, which went towards showcases for the museum as part of the debt swap project between Italy and Egypt.

A total of 944 pieces are on display at the museum, with the display lay-out inside also having been changed, to start with a statue of a family, which is the pillar of society.