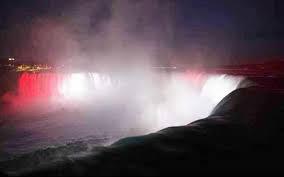 The world-famous Niagara Falls, located on the US-Canadian border, was illuminated in the colours of the Egyptian flag, on Friday evening, to mark the 23 July Revolution anniversary.

The illumination in the Egyptian colours has taken place for the second consecutive year, at the initiative of the Egyptian Embassy in Canada

Ahmed Abu Zeid, Egypt’s Ambassador to Canada, said that many members of the Egyptian community in Canada participated in the unique event, as the embassy in Canada invited them to witness the moment with family and friends.

Those Egyptians who attended also took souvenir photos and sent them to the Egyptian Embassy for publication on its social media pages.

Aside from the 23 July Revolution celebrations, the Egyptian Embassy in Canada has organised many virtual and in-person events throughout the month. This includes events to mark Egyptian Heritage Month, which takes place every July in Canada.