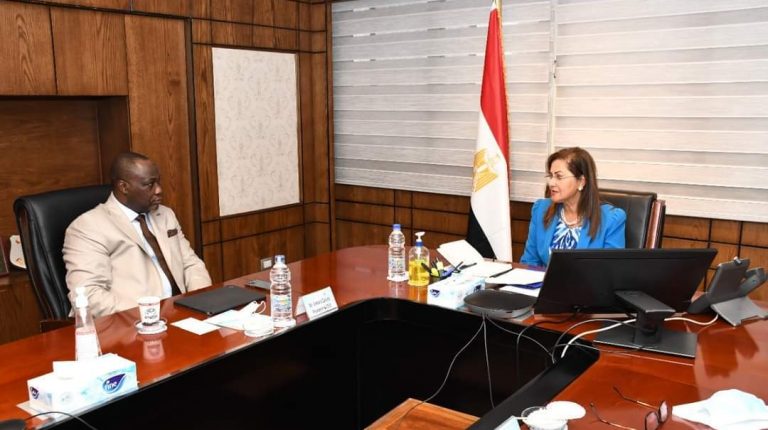 Egypt’s Minister of Planning and Economic Development Hala El-Said held a meeting, on Monday, with Samaila Zubairu, President of the African Finance Corporation (AFC), and the corporation’s work team.

During the meeting, El-Said reviewed the fields of work undertaken by her ministry and its subsidiaries, and its most important units and projects.

The minister also looked at: the areas of work of The Sovereign Fund of Egypt (TSFE); the most important projects that it is working on; and the areas in which it seeks to invest and build partnerships with the Egyptian and international private sector.

The two sides discussed several topics, the most important of which were the opportunities for cooperation between the AFC and TSFE in the fields of infrastructure, renewable energy, transport, and pharmaceutical industries.

El-Said reviewed the number of cooperation opportunities, foremost of which is the manufacture of electric rail cars projects through the National Company for Railway Projects (NERC).

TSFE is currently cooperating on the project with the Ministry of Transportation and the Suez Canal Economic Zone (SCZone). It is also cooperating with the pharmaceutical industries, especially those producing vaccines to provide them to all African countries.

Meanwhile, El-Said noted Egypt’s interest in becoming a full member of  the foundation, as well as its keen interest in deepening relations with African institutions at all levels.

“Egypt always seeks to partner with African countries and institutions, as it reflects a strategic and natural connection between the people of the same continent,” She explained.

Zubairu confirmed that the AFC is looking forward to completing Egypt’s full membership to join about 31 African countries who are already members of the foundation. This will also reflect Egypt’s pivotal role in the African continent.

He stressed the AFC’s keenness to pump investment funds into Egypt, especially in the fields of infrastructure, renewable energy, and transportation. This is because the country is witnessing a great resurgence, and is implementing several giant projects that aim to attract investment.