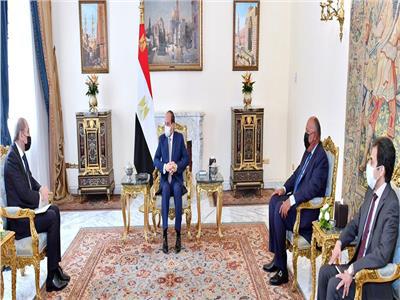 During the meeting, the two sides addressed on the situations in Lebanon, Syria, and Libya, as well as the Middle East peace process, and the existing coordination between the two countries.

The meeting took place after Al-Sisi’s reception of Al-Safadi on Monday in Cairo, in the presence of Egypt’s Minister of Foreign Minister Sameh Shoukry.

Al-Sisi also expressed his aspiration to strengthen these relations in a way that contributes to achieving the interests of the two countries and their respective peoples, especially at the economic and commercial levels.

The President also praised the efforts made by the Jordanian Government within the framework of sponsoring the Egyptian community in Jordan.

Rady said that the meeting witnessed a review of the overall bilateral relations between the two countries, and that both sides noted their satisfaction at the existing level of coordination.

The meeting also emphasised the importance of strengthening economic relations and increasing trade exchange to the level of political relations and historical ties that unite the two peoples.

This was in addition to boosting cooperation between the competent authorities in the two countries regarding the repercussions of the novel coronavirus (COVID-19) pandemic.

The two sides praised the tripartite cooperation between Egypt, Jordan, and Iraq, and stressed the need to build on the outcomes of the last summit meeting in Baghdad last June.

They also highlighted the need to take concrete measures that contribute to increasing coordination and joint cooperation between the three countries, especially regarding energy projects, electrical interconnection, and industrial complexes.

Regarding the Middle East peace process, Al-Safadi praised the tireless Egyptian efforts to consolidate the ceasefire between the Israelis and the Palestinians, as well as Egypt’s initiative to rebuild the Gaza Strip.

The two sides highlighted the intensified international efforts that aim to resolve the peace process and restart negotiations to settle the Palestinian crisis based on the resolutions of international legitimacy.

Meanwhile, Al-Safadi praised the progress of bilateral relations, as well as the level of the tripartite cooperation mechanism with Iraq.

He affirmed Jordan’s keenness to benefit from Egypt’s development efforts in all fields through the exchange of experiences and joint investment. This is in light of the comprehensive development process and the major national projects being implemented in Egypt.

The minister also conveyed a message from King Abdullah II to President Al-Sisi, as part of the ongoing consultation and coordination process dealing with strategic relations and regional developments.

In the same context, Shoukry and Al-Safadi discussed ways to enhance bilateral relations, as well as coordination regarding all regional developments of common concern.

Al-Safadi expressed Jordan’s deep appreciation for Egypt, and its pride in the extended ties that unite the two countries.