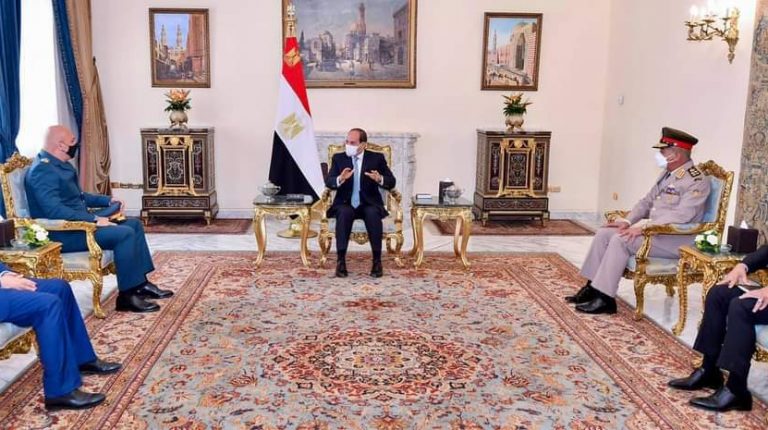 He also praised the primary role played by the Lebanese National Army to maintain stability and balance in Lebanon.

Al-Sisi’s remarks came during his meeting with General Joseph Aoun, Commander of the Lebanese Armed Forces, in the presence of Egypt’s Minister of Defence Mohamed Zaki, and Lebanon’s Ambassador in Cairo Ali Al-Halabi.

Egyptian Presidency Spokesperson Bassam Rady said that Al-Sisi asserted his pride for the depth of Egyptian-Lebanese relations in different fields.

Meanwhile, Aoun conveyed the greetings of Lebanese President Michel Aoun to Al-Sisi, and highlighted Lebanon’s keenness to strengthen the historical ties with Egypt.

He expressed his country’s appreciation for the Egyptian efforts in supporting Lebanon in all fields, as an extension of Egypt’s pivotal role in maintaining stability in the entire Arab region.

Rady added that the meeting dealt with ways to enhance the existing bilateral cooperation between the two countries, and to benefit from the Egyptian experience in many fields.

Earlier in July, Egypt expressed its full support for Lebanon to resolve its crippling economic and political crisis. The statement came as then Lebanese Prime Minister-Designate Saad al-Hariri visited the Egyptian capital.

Al-Sisi reaffirmed Egypt’s full support for Hariri’s political path, which aimed to restore stability to Lebanon, and for his attempts to deal with challenges including the formation of a government, a presidency statement said.