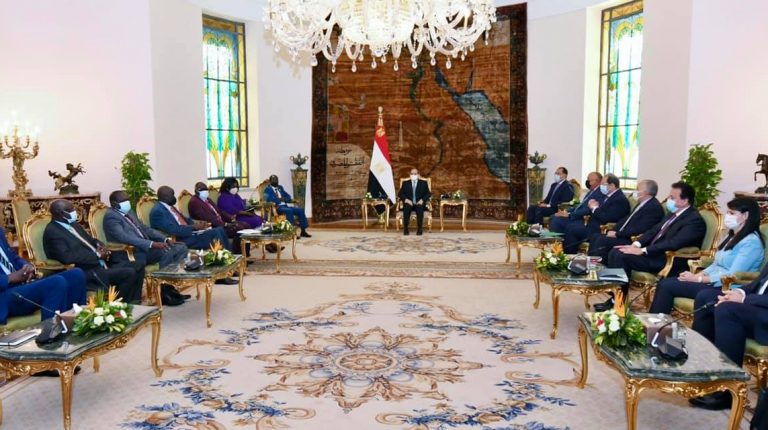 He said that this should take place in a manner that meets the interests of all parties, in the endeavours to achieve development, as well as to preserve Egyptian water security.

Al-Sisi made his remarks during a meeting in Cairo, on Wednesday, with James Wani Igga, Vice President of South Sudan for Economic Affairs.

The meeting saw discussions on ways to activate and develop bilateral cooperation frameworks between the two countries in various fields in the coming period. Also on the discussions table was the exchanging of views on the developments in a number of regional files of common interest.

President Al-Sisi welcomed the first session of the joint higher committee, which was held between the two countries in Cairo.

He said that the session confirms the two countries’ common interest in strengthening bilateral relations in various fields, and raising the relations to the level of strategic partnership. This makes it a model for development partnership between the Nile Basin countries.

Al-Sisi also affirmed Egypt’s determination to continue providing technical support to South Sudan at all levels, especially in development. This will ensure the latter benefits from Egypt’s leading experiences in advancing the development process in several sectors.

It will also see the launch of a process of economic integration in several areas, such as investment and trade exchange, energy, infrastructure, and petroleum.

Additionally, he further expressed Egypt’s pride in holding the first Egyptian products exhibition in the South Sudanese capital, Juba, this month. This will establish an active and effective trade movement between the two countries, in addition to moving forward in establishing the Alexandria University branch in South Sudan.

Al-Sisi also stressed Egypt’s keenness to continue its endeavours at the regional and international levels to enhance efforts to achieve continuity of stability, peace, and security in South Sudan, as a mainstay and inevitable for any development efforts.

For his part, Igga reviewed the latest developments in the political situation in his country, and praised Egypt’s role and efforts in supporting stability in the region and in South Sudan. This comes as part of the historical ties that unite the two countries and peoples, as well as Egypt’s leading role on a regional level.