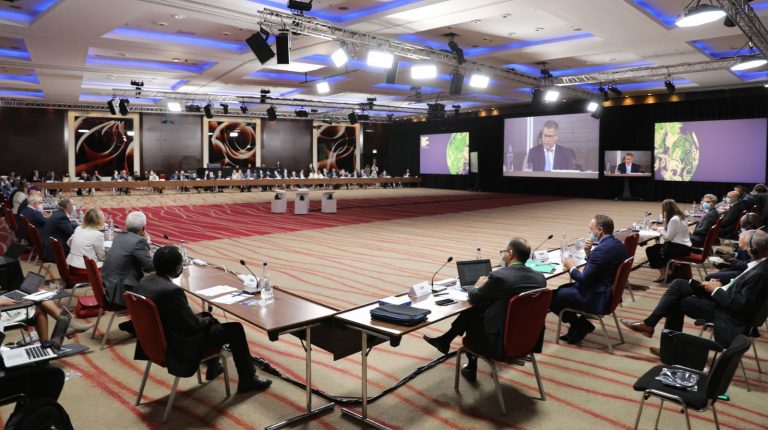 For the past two days, United Nations (UN) Climate Change Conference (COP26) President-Designate Alok Sharma has met with climate and environment ministers and representatives from over 50 countries, including Egypt’s Minister of Environment Yasmine Fouad.

During the meeting, the participants discussed laying the groundwork for success ahead of negotiations at November’s COP26 event, which will take place in Glasgow.

With fewer than 100 days to go until the critical UN climate change conference, Sharma convened the meeting in London. It aimed to shape the vision of the final outcomes from COP26, and build a “unity of purpose to deliver them”.

The two-day meeting saw major emitters, like the US and China, in discussion with countries that are most vulnerable to the effects of climate change, such as Jamaica, Costa Rica, Rwanda, and the Marshall Islands.

The ministerial meeting covered the UK COP Presidency’s key goal of limiting warming to 1.5°C. Topics under discussion included: mobilising climate finance; scaling up efforts to adapt to the impacts of climate change; and loss and damage caused by climate change.

It also aimed to finalise the “rulebook” for implementing the Paris Agreement, with a focus on Article 6, which sets out how countries can reduce emissions using international carbon markets and non-market approaches.

Ahead of the meeting, Sharma said, “We are facing perilous times for our planet and the only way we will safeguard its future is if countries are on the same path.”

“As ministers responsible for tackling climate change, we hold the weight of the world on our shoulders, and the next two days will be nothing short of critical,” he added.

Sharma also noted that, with parties coming from different standpoints and perspectives, the world will be watching to see whether they come together in Glasgow and do what is necessary to turn things around in this decisive decade.

“It is essential that together we roll up our sleeves, find common ground, and collectively draw out how we will build a greener, brighter future for our children and future generations,” he said.

The UK intended for the informal, closed-door meeting to encourage frank conversations so that parties can find ways forward when they meet again in November.

During the meeting, Fouad stressed Egypt’s keenness to present its ideas on issues related to climate change. This is not only limited to being a party to the Adaption Action Coalition, which was launched by the UK and Egypt.

It also means to move forward and achieve satisfactory results, especially with regards to achieving a balance between adaptation and mitigation to the effects of climate change.

Fouad added that it is necessary to work on increasing the funding needed for adaptation, including public and grant-based funding. At the same time, this should ensure the provision of continued assistance to developing countries and meeting their needs, including finance, technology, and capacity-building support, to implement adaptation projects. She emphasised the need to find ways to ensure the sustainability of the Green Climate Fund.

Sharma reminded ministers that to achieve the goal of keeping 1.5°C within reach, countries must put the planet on a path to driving down emissions with mid-century net zero commitments and ambitious 2030 emissions reduction targets.

This also means to protect people and nature from the impacts of climate change and get finance flowing to climate action. Additionally, there needs to be cooperation to ensure the negotiations are a success.

He also stressed the need for urgent action to phase out coal and internal combustion engine vehicles, as well as to end deforestation.

While the majority of participants attended in person to build strong inter-ministerial relationships ahead of Glasgow, the COP Presidency has facilitated virtual participation for those unable to travel to London.