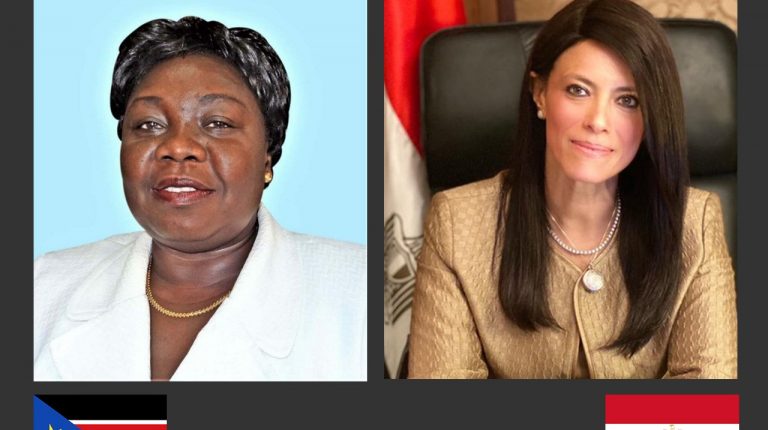 Egypt and South Sudan held, on Tuesday, the first round of Joint Higher Committee preparatory meetings at the expert and ministerial level.

The committee is also part of Egyptian Prime Minister Mostafa Madbouly’s directives, issued in October 2020, to start preparations for the Joint Higher Committee between Egypt and South Sudan.

Following this, the Ministry of International Cooperation held the first coordination meeting in November 2020, between line ministries and entities concerned with strengthening cooperation with South Sudan, with the second meeting held last June.

In addition, several field visits were also carried out by line ministries and technical entities to discuss the proposed areas of cooperation between both countries.

Minister of International Cooperation Rania Al-Mashat chaired the coordination meeting at the ministerial level, with the participation of several Egyptian and South Sudanese entities.

Minister Al-Mashat represented the Egyptian side in the preparatory meetings, whilst Beatrice Wani, South Sudan’s Minister of Foreign Affairs and International Cooperation, represented her country.

It is worth noting that Madbouly and South Sudan’s Vice President James Wani Igga chaired the first session of Egyptian-South Sudanese Joint Higher Committee talks. The meeting witnessed the signing of several cooperation agreements between the two countries.

Minister Al-Mashat emphasised that holding the first session of the Egyptian-South Sudanese higher committee comes as part of the agreement signed in 2012 between both countries.

It reflects Egypt’s keenness to enhance cooperation with African countries, under the leadership of President Abdel Fattah Al-Sisi.

The minister referred to the Egyptian President’s visit to South Sudan in November 2020, and his directives to advance development efforts and joint relations between both countries.

She added that there are several areas of joint cooperation between both countries across various sectors, including water resources, irrigation, health, education and electricity.

Minister Al-Mashat expressed that this cooperation paves the way for advancing development efforts in Sudan. It also leads to strengthening Egyptian investments that aim to deepen economic relations between Egypt and South Sudan, which in turn makes room for enhancing private sector’s engagement.

She added that in the past period, joint relations between both countries witnessed successful mutual technical visits, the latest of which targeted agriculture, higher education, trade, industry, supply, and health.

The minister indicated that holding the Joint Higher Committee meeting will magnify this joint relationship, adding that it reflects the Ministry of International Cooperation’s doctrine of Economic Diplomacy.

The ministry is using this to strengthen economic relations between Egypt and other countries across the region, and to advance cooperation frameworks across various fields that are reflected in development efforts.

Egypt has been keen on consolidating economic and development cooperation with South Sudan since its independence in 2011. As part of this, several Memorandums of Understanding (MoUs) were signed across various sectors, such as agriculture, health, environment, education, petroleum, culture, water resources, and irrigation.