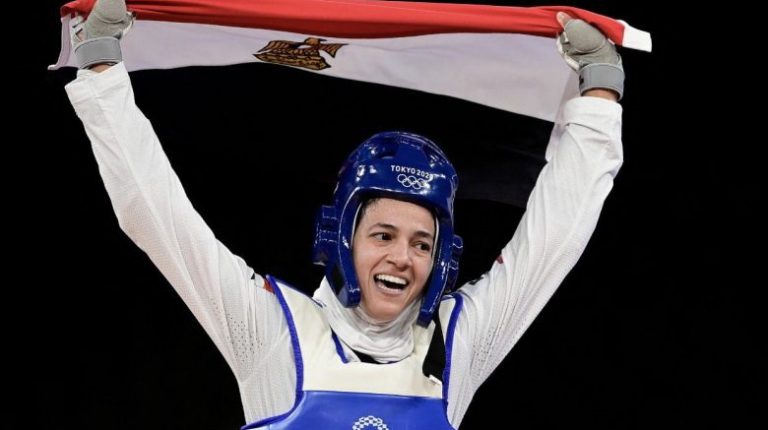 Egypt’s female taekwondo fighter Hedaya Malak won the first of the country’s medals at this year’s Olympic Games in Tokyo, bringing home the Bronze medal in her event.

Malak started her trek in the 67kg weight group by defeating France in the round of 16 with a score of 11/10. She then succeeded in qualifying for the quarter-finals of the competitions, before losing 12/13 to a British player and failing to qualify for the semi-finals.

She was able, however, to enter the consolation matches after the British player succeeded in qualifying for the final round. Malak met with Tonga and won 19/0, before facing the US.

Her victory in taking Bronze makes Malak the first Arab and African player to win an Olympic medal twice in a row, having previously won in the 2016 Olympics in Rio de Janeiro.

She qualified for Tokyo after defeating her Kenyan rival during the semi-finals of the African qualifiers for the Olympics, which was held in Morocco.

Since taking up taekwondo at 10 years old, Malak has won many tournaments and won over 25 medals.

Most notably of these, Malak also won Bronze in the 2016 Rio de Janeiro Olympics, as well as winning two medals in the African Games, Silver at the Islamic Solidarity Games, and Bronze in the Mediterranean Games and African championships.

Issa’s latest medal, the Bronze at the 2020 Tokyo Olympics, was Egypt’s second medal in Tokyo, and came after his 12/4 defeat of Norway’s Andre Ordmann in the 80 kg category competition.

The Norwegian player defeated Moroccan player Ashraf Mahboub in the consolation match by a score of 24/10.

Issa had lost to Russian Maxim Khramtkov 13-1 in the semi-finals, after defeating Italy’s Simone Alessio in the quarter-finals.

Aside from his latest achievement in Tokyo, Issa’s most prominent achievements was winning the Bronze medal at the Youth Olympics in 2014.

Issa qualified for the 2020 Olympics after reaching the final of the African qualifying tournament for the Games, which was held in the Moroccan city of Rabat.

Amr Selim, Head of Egypt’s Taekwondo Federation, said that the country did not spare anything for the delegation currently participating in the Tokyo Olympics. This comes particularly after the taekwondo duo, Hedaya Malak and Saif Issa, were both able to win Bronze medals in their respective groups.

He added that Egypt deserves more than that, especially with the sporting boom that the country is witnessing during the era of President Abdel-Fattah Al-Sisi.

Egypt has found success in recent Olympic taekwondo competitions, with Tamer Salah winning Bronze at the 2004 Athens Olympic Games. This was before Hedaya Malak added Bronze at the 2016 Rio de Janeiro Olympics, and Saif Issa adding his win in Tokyo raising the total Egyptian taekwondo medals to four.

Egypt’s weightlifting players have proven their prowess by winning the most number of medals for the country at the Olympics, at a total of 14, including five Golds, three silvers, and six Bronzes.

Egypt is participating in the Tokyo Olympics with a mission that is the largest in its Olympic participation, with a total of 146 athletes. There are 134 main players, including 86 male and 48 female athletes, in addition to 12 reserves. 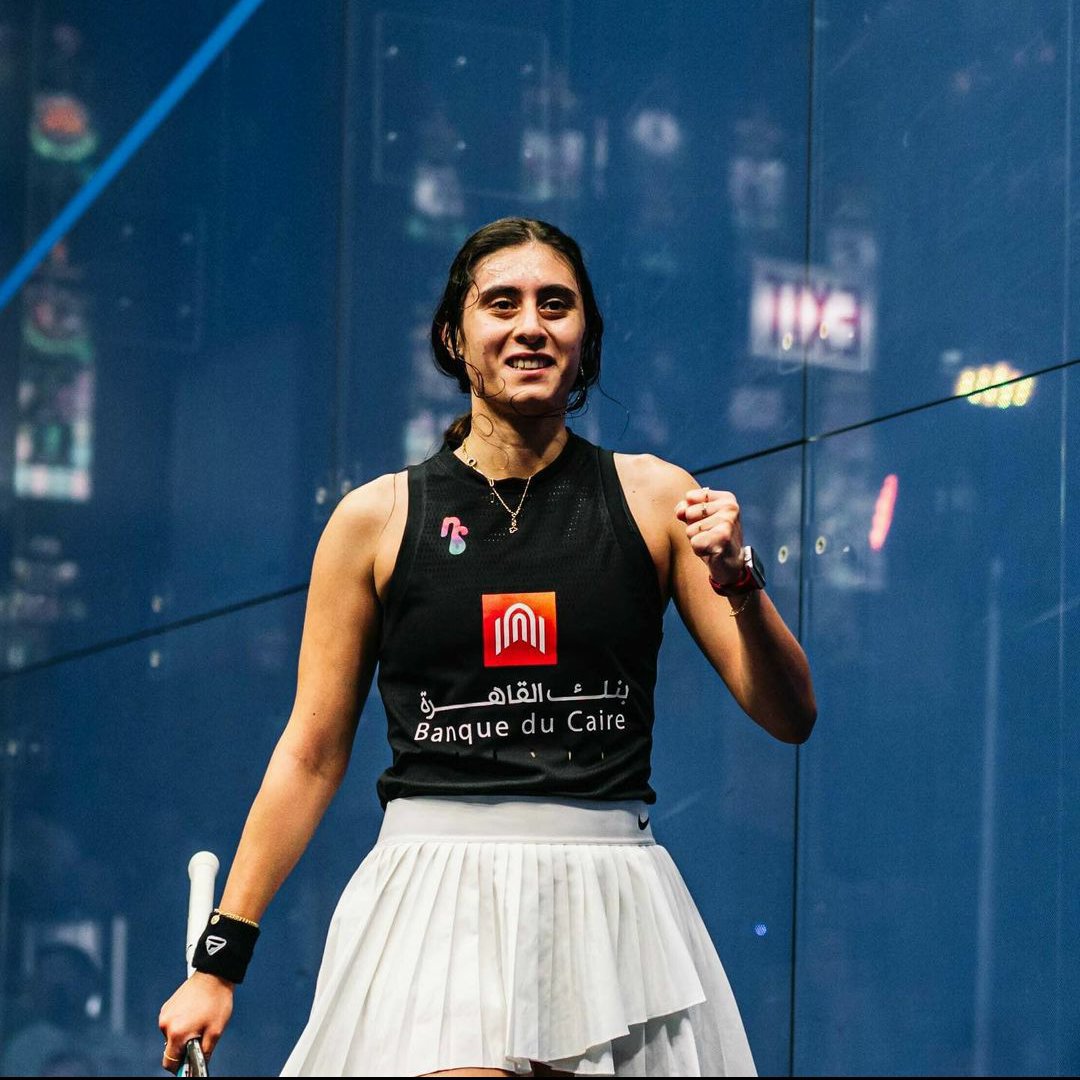 Since Alexandrian squash player Nour El-Sherbiny’s first appearance in the glass court, her coaches have been sure that she would be a champion one day.

Her domination of women’s squash continues, with her recent win of the World Squash Championships for the fifth time.

She has shown determination to reach the top at every age stage she participated in, with her elbows proving to have a special charm, with her flexibility, fitness, and agility inside the glass court grabbing hearts and minds.

It took El-Sherbiny only two years to enter the stage of competitions for titles and championships. At the age of seven, she began participating in local squash tournaments, whilst at the age of eight, she won the first cup in her career. At the same age, she won the Al-Gezira Championship.

It was at 12, however, that she saw a real breakthrough in conquering the world with her magic on the squash courts. It was at this age that El-Sherbiny won the British Championship in 2007 in the junior category, as the first Egyptian to achieve this achievement.

The International Squash Players Association gave her the award for the best young player in 2009, and in the same year she entered the top 50 list in the world rankings.

Two years later, she won the Heliopolis Championship and rose to a worldwide ranking of 36. At that time, she also managed to reach the second round of the Open World Championships, and competed in the semi-finals in New York and Kuala Lumpur.

This allowed her to enter the Top 20 rankings in the world, becoming the youngest professional player to play in the British Championship final and the first Egyptian woman to reach the final round in 2012.

In June 2012, El-Sherbiny reached a world ranking of No 7 at just the tender age of 16, and in the same year, she won the World Women’s Championship. In 2016, she became the first Egyptian player to win the British Open Squash Championship, to top the world ranking in April of 2021.

Achievements speak for themselves

There is no doubt that El-Sherbiny was born a hero in squash, dazzling the world with her charm and skill on court. She has become a squash icon in Egypt and even worldwide. At just 26, she has taken on a legendary status on the squash court, participating in tournaments and winning them one by one.

Earlier in July, she won the World Squash Championship women’s title, hosted by the US city of Chicago, with a value of $500,000 in prizes for men and the same for women. The Alexandrian champion won in the final match against World No 2 Nouran Gohar, with a score of 3-1 in a match that lasted 53 minutes.

El-Sherbiny’s achievements speak for themselves. This tournament is not only her fifth World Squash Championship women’s title win, but also her third consecutive such title, after winning the championship in the 2015, 2016, 2019, 2020, and finally 2021 seasons.

She has also earned a unique achievement after qualifying to the final in that tournament. This is the seventh time in its history and the sixth in a row that El-Sherbiny has reached the final of the tournament.

Her success now equals the achievement of Pakistani squash legend Janshir Khan, as well as the Australian Sarah Fitz Gerald, who has the same number. She is now only three championship titles away from equalling Malaysian squash player Nicole David’s historical record of eight titles.

Nour is a player with a unique style. She holds the racket as if she is holding a guitar, violin, or even an oud in her hands. She plays the most beautiful melodies with it. The athlete enters the competitions and does not accept defeat in any way.

In December 2019, El-Sherbiny received a special and unique honour in the form of the Order of the Republic of the first class, after her great achievements in squash.

On the day she received the medal, she met President Abdel Fattah Al-Sisi, who granted her this honour alongside a group of famous athletes that year.

The meeting, and the award she received, held a special taste for the Egyptian hero, who expressed her great pride and happiness at this historic event in her life.

She also published photos of her interview with the President, as well as a picture of her award, through her official accounts on social media.

El-Sherbiny dreams of including squash in the Olympic Games. If that happens one day, Egypt will guarantee medals in that game. She would almost certainly gain a place on the team, as her skill will guarantee a significant number of medals.