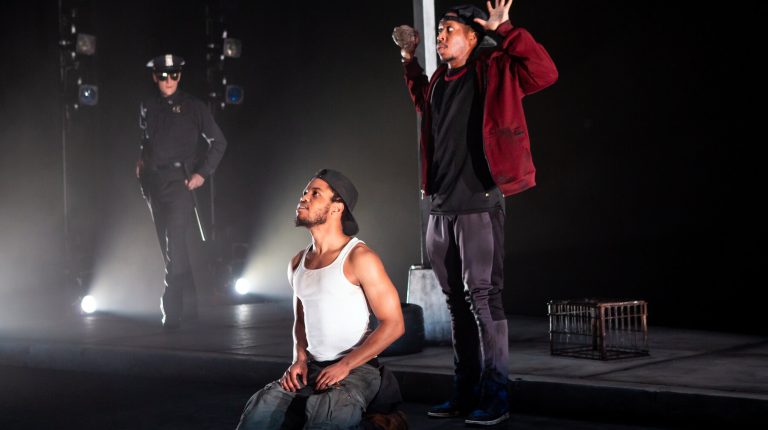 During a long period of absence, the lights of all theatres across the US were completely dimmed for more than 18 months due to the novel coronavirus (COVID-19) pandemic, threatening the theatre industry in general.

It has now finally been decided to resume theatrical performances from September. However, as expected, the Broadway theatre decided that the comeback would be different and ahead of schedule as well.

Broadway chose the gripping new drama Pass Over to begin performances on 4 August at the August Wilson Theatre. Thus, Antoinette Chinonye Nwandu’s riveting, provocative work will be the first new play to open on Broadway since the shutdown of March 2020.

Choosing this play to be the first theatrical performance on Broadway after this long period of absence confirms that the political role of theatre always precedes entertainment, as this play explores the long, grim past and possible future of race in America.

Nwandu’s Pass Over is a 21st Century riff on one of the most famous absurdist plays of all time, Samuel Beckett’s post-war classic Waiting for Godot.

The play borrows from Godot’s abstract form and circuitous humour to explore the experience of two young black men in America. However, in Pass Over the protagonists are not only stuck in the existential conundrum of living, like Vladimir and Estragon in Waiting for Godot, but of surviving in a world that continues to displace and devalue their lives.

It follows two young black men as they hang out on a street corner talking and joking, and while they pass the time, the two wonder if today will be different. It dramatises a day in the life of Moses and Kitch, who spend their time trading stories about recent casualties of police brutality, while daydreaming about better times, that “promised land” still to come.

It is also inspired in part by the shooting of Trayvon Martin, whose death sparked widespread protests across the nation. Nwandu’s poetic, politically-charged new work confronts the limits and the failures of the American dream,confronting the fear which daily plagues Black lives, where even hanging out on a corner can mean risking your life.

It is a highly poetic, timely, and provocative play, emphasising that Black bodies continue to suffer the onslaught of racial violence. This is not only from police brutality, but also from a resurgence of white supremacy, widespread gentrification, and privileged denial.

Indeed, the timing of the play’s presentation is very crucial in light of a highly striking political atmosphere in the US. It comes after a difficult period under former President Donald Trump’s rule, which almost restored racism to its previous era.

It also gave the police the green light to deal with African-American political activists with all possible violence to suppress voices demanding equality. The play is a clear message to current President Joe Biden, who has long asserted in his election campaign that he ran for the role to ease the racial divisions of our time, pledging to recover “the soul of America” from the polarising Trump era, describing the latter as a “racist” who uses “dog-whistle” language.

Even after his victory, Biden underscored his determination to address concerns about policing, prisons, and massive economic disparities faced by Black Americans, saying every agency of his government was focused on those challenges.

Biden also made a lot of promises and commitments to African-Americans that are still being tested. He said that his $2.3trn infrastructure and jobs plan would ensure further “significant, significant changes” in improving economic opportunity for Black Americans and all communities.

In fact, Black people have always been resilient in the face of a government that does not care about them, and to this day, racism and inequality are undeniably the biggest challenges in the US.

For example, in 2018, the Black Census Project, one of the largest opinion polls in US history in which more than 30,000 African-American citizens were surveyed, it was clear from the results that the pain and legacy of slavery and Jim Crow still infect the everyday lives of Black communities.

As its title suggests, it is a play about waiting – two men waiting for a third to solve their problems, but he never appears. Hence, Pass Over raises a very important question at this unprecedented time in US history: will Joe Biden be able to establish the values of democracy and equality to include African Americans, or will African Americans keep dreaming of promises that never come true?