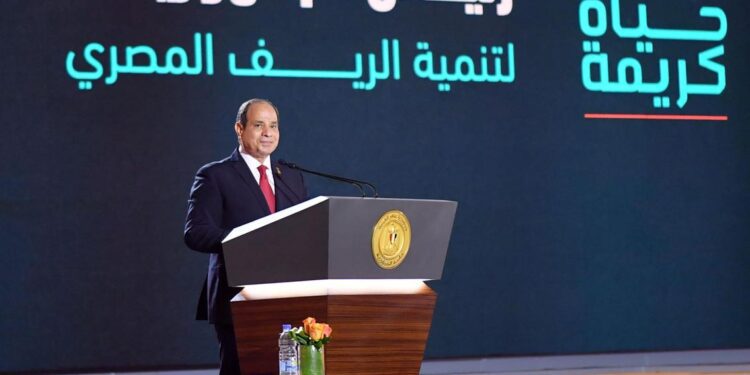 The speech delivered by Egypt’s President Abdel Fattah Al-Sisi about the Grand Ethiopian Renaissance Dam (GERD) crisis, during the inauguration of the “Decent Life” project in front of thousands of Egyptians, was reassuring and decisive.

The speech can be described as an affirmation of the extent of confidence and credibility enjoyed by President Al-Sisi among the Egyptian people who attended the celebration.

The president also spoke about the legitimate concerns the people may feel, and stressed that Egypt has all the options to respond to any attack on its legitimate historical rights, concluding his speech to the Egyptian people by saying: “Live your life”.

Egypt has succeeded in transferring the crisis suffered by the riparian states to the UN Security Council, which is a very important and dangerous file, as the water war has been and still is the subject of expectations and studies for decades.

It is already one of the most basic elements in all the conflicts in the Middle East, from Iran to Iraq, from Syria to Turkey and Lebanon, from Jordan to Israel. The water crisis remains the common denominator in all conflicts in the region.

Because conflicts are born out of crises, water scarcity has caused wars, and before the GERD crisis, there was the Tigris and Euphrates war, where Turkey manipulated the share of water that should flow into Syria and Iraq.

Iran also prevented cutting off the amount of water from the Sirwan, Karun, and Karkheh Rivers in Iraq, according to the latter’s Minister of Water Resources. Iraq is now threatening to turn to the international community. Before these conflicts, there was the Jordan River war with Israel and the project to transform its tributaries.

Tel Aviv itself was, and still is, coveting the waters of the Litani and Wazzani Rivers in Lebanon, in addition to its possession of the waters of the Jordan River, so that Jordan is forced to buy water from Israel.

This is what actually happened during the past few days, as it was agreed between Amman and Tel Aviv that the latter would sell the first an annual share of water over the sale of water.

The process of negotiating the GERD file should have ended with peaceful options, but Ethiopia’s evasion led to the consideration of other options, including military options.

The joint manoeuvres carried out by Egypt and Sudan in the past periods inside their lands were a kind of pressure card, to be used when needed at the negotiating table, and not to prepare for military action.

Currently, it seems that the time for negotiation is running out. Egypt and Sudan are facing the problem of the second filling of the dam against their wishes, and without reaching a binding agreement with the Ethiopian side.

Indeed, Addis Ababa suffers internally from several problems, such as the Tigray People’s Liberation Front (TPLF) reoccupying the northern Tigray region in a lightning battle. The strike humiliated the Ethiopian army and captured hundreds, leaving the Ethiopian army in a weak position.

It is also true that Egypt and Sudan will not be affected by the second filling after Addis Ababa failed to retain the amount of water it announced. However, the convening of the UN Security Council meeting, regardless of its direct results, has achieved its goal.

It has forced the international community to confront its responsibilities towards that crisis and its escalation of the agenda of issues affecting regional and international security.

In other words, the meeting has become an international cover for any possible non-negotiating action if the stalled negotiating path turns into “useless work”.

This bears in mind that the position of the international community is not the decisive factor or the main driver of what Egypt can do if it decides to use other mechanisms to achieve its political and strategic objectives in the dam crisis.

Certainly, Cairo will not wait for a green light to defend its existence and survival against any threat. The world only recognises the strong, and the escalation of the official Egyptian discourse has raised the expectations of people preoccupied with this crisis.

This has made them wait for a surprise or a solution that removes the threat to their water security and establishes a new basis for consensus nationally at the internal level.

Finally, the phrase that the leader of Egyptian diplomacy Minister of Foreign Affairs Sameh Shoukry used at the UN Security Council remains firmly in mind.

Shoukry noted that Egypt has pledged to “protect and preserve its inherent right to life and survival” in the face of what it considers an “existential” threat to its entity. This pledge, however, remained conditional if “their water rights are damaged or their survival is endangered”.