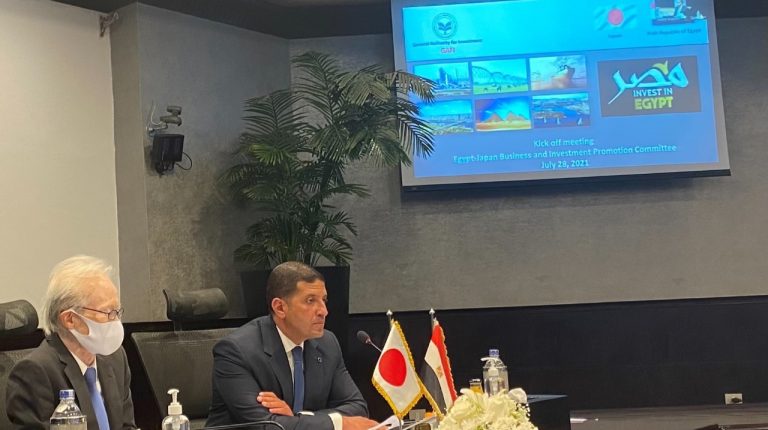 Noke Masaki, Ambassador of Japan to Egypt, and Mohamed Abdel-Wahab, Chief Executive Director of the General Authority for Investment and Free Zones (GAFI), co-chaired Wednesday an inaugural session of the “Egypt-Japan Business and Investment Promotion Committee”.

The Japanese and Egyptian sides had fruitful discussions on ways to enhance their bilateral business and investment relationship.

The establishment of the committee was first announced during a meeting between Egypt’s President Abdel Fattah Al-Sisi and then-Prime Minister of Japan Abe Shinzo, which was held on the sidelines of the 7th Tokyo International Conference on African Development (TICAD 7) in August 2019.

During the meeting, both officials confirmed the purpose and the structure of the committee, participants discussed business and investment experiences in Egypt based on the presentations given by the Japanese Businessmen Association (JBA), Japanese companies operating in Egypt (Toyota Tsusho, Nissan Motor Egypt, Sumitomo Electrical Wiring Systems Egypt (SEWS), and Saraya), Japan Bank for International Corporation (JBIC), Nippon Export and Investment Insurance (NEXI), and GAFI.

The Japanese side explained what they have achieved in Egypt while presenting some challenges they face in their activities in Egypt.

JBIC and NEXI emphasized they support the activities of Japanese companies in Egypt by providing necessary financial programs. GAFI explained the measures they have taken to encourage more investment from Japan and introduced possible business opportunities for Japanese companies.

Also, Egyptian companies (Elaraby Group, Elsewedy Electric, Orascom Construction, and Hassan Allam Holding) gave presentations and expressed their interests in possible collaborations with Japanese companies for their operations including outside Egypt such as Africa.

The outcome of the meeting would be reported to the Prime Minister and the next meeting is expected to be held before the TICAD 8 in Tunis in 2022.

“It was also interesting to learn the experience of collaboration between Egyptian and Japanese companies in Egypt and in other countries in the Middle East and Africa,” he added.

The Ambassador expressed his hopes that the committee will give impetus for creating more desire among Japanese companies to invest in Egypt and develop partnerships with Egyptian companies and resolving challenges in conducting business in Egypt.

“I look forward to witnessing enhanced business relationships between Japan and Egypt,” he added.

Abdel-Wahab stated that this committee would serve as an important platform for Japanese companies to get a better understanding of existing and potential business and investment opportunities in Egypt and with Egyptian companies.

He reiterated that GAFI is ready to put every effort to support Japanese business and investment activities in Egypt.

Chief Representative for the Middle East, Representative Office in Dubai, JBIC, Mr. Urata Hideyuki, Senior General Manager, NEXI, and Mr. SAITO Hidenori, Representative of the Japan Egypt Business Council (JEBC), as well as participants from GAFI and Egyptian ministries, the Embassy of Japan, and Japanese and Egyptian companies, had also taken part in the meeting.