The 2020 Tokyo Olympic Games kicked off a year late on 23 July 2021, quickly identifying itself as the most gender balanced Olympics in history with almost 49% of participating athletes being women.

Those few women who did practice sports were, without exception, not allowed to compete, and their clothing was limited to what was socially accepted at the time.

Behind today’s celebration, there are countless stories of women athletes that struggled to reach that point.  Daily News Egypt dug further in the struggling history stations.

The very first modern-day Olympic Games were held in the summer of 1896 in the Greek capital, Athens. They took place without the participation of any female sportspeople, who were not allowed to attend.

The founder of the modern Olympic Games, Pierre de Coubertin, had visualised the Olympics as a display of athletic performances, representing men’s abilities, endurance, strength, virility, and courage. As he believed that women did not have any of those qualities, they could only sit as spectators.

He also thought that women had one task, which was to play the role of crowning the winner with garlands. De Coubertin felt that a woman’s participation must be absolutely prohibited in public competitions.

He believed that it was indecent that spectators would be exposed to the risk of seeing the body of a woman before their eyes. First woman to compete in Olympics

Four year after the first Olympic Games, women first took part in the Olympic Games in Paris in 1900. As the idea of having only men in the Olympics backfired, this led to the International Olympic Committee (IOC) deciding to allow a limited number of women to participate in the second games. The participation of women was not great, with only 2.2% of the participating athletes, or only 22 of the total 997 athletes taking part, being female.

Women were also allowed to compete in only five sports, namely: tennis; golf; croquet; sailing; and equestrian events. It was only golf and tennis that had women-only events, compared to 95 competitions for men, whilst the other three sports were mixed competitions.

The second Olympic Games happened in the 1900 Paris Games. They were held during the World Fair and the competitions were spread during the period from 14 May to 28 October.

On 22 May, Switzerland’s Hélène de Pourtalès became the first woman to compete in the Olympic Games and the first female Olympic champion, after winning the gold medal with her team, in the 1-2-ton sailing.

Although a new chapter had begun with having the first female Olympic Champions, at the 1904 Olympics held in the US city of St Louis, the only competition open to women was archery. The Games were again part of the World Fair, and were held from 1 July to 23 November.

Unfortunately out of 651 athletes, only six of them were women, and all of them were North American. Lida Howell conquered three Olympic Champion titles, two of them individual and one in a team.

The 1908 Olympic Games were held in London from 27 April to 31 October, and saw the participation of 37 women out of 2,008 athletes. They competed in archery, tennis, and ice skating.

Four years later, at the 1912 Olympics, the number of the women who participated began to increase, to 48 out of 2,407 athletes total. Women competed in aquatic sports (swimming and diving), as well as in the female and mixed doubles tennis competitions. Although this was still, however, not enough participation from female athletes, the 1912 Olympics were distinguished as, for the first time, athletes from all five continents were present.

The 1916 edition was the first to be cancelled due to the outbreak of the World War I, although it took place in 1919, where French athlete and feminist Alice Milliat started negotiations with the IOC and the international Association of Athletics Federations.

She demanded an increase in women’s participation in the Olympic Games through having more women’s sports than merely a selection of them, whilst increasing the number of women athletes participating.

Unfortunately, all her demands were refused, as the IOC at that time used to believe that the full integration of women in the Olympics would take the spotlight away from the true athletes, which they believed were men.

In order to prove that women were actually athletes, and in protest at the ban on women competing in most of the Olympic Games, Milliat inaugurated in 1921 the International Women’s Sports Federation, through which she organised the first Women’s World Games.

Whilst the games attracted thousands of fans, she had to rename the event as the Women’s World Games, due to IOC demands.

On the other hand, the number of women participating in the actual Olympics was still limited as in 1920, out of 2,626 athletes, only 63 were female. The number was duplicated in 1924 with women also now able to participate in fencing competitions, but this was still not enough considering only 135 women out of a total of 3,089 athletes participated.

In 1925, the founder of the modern Olympic Games left the IOC. 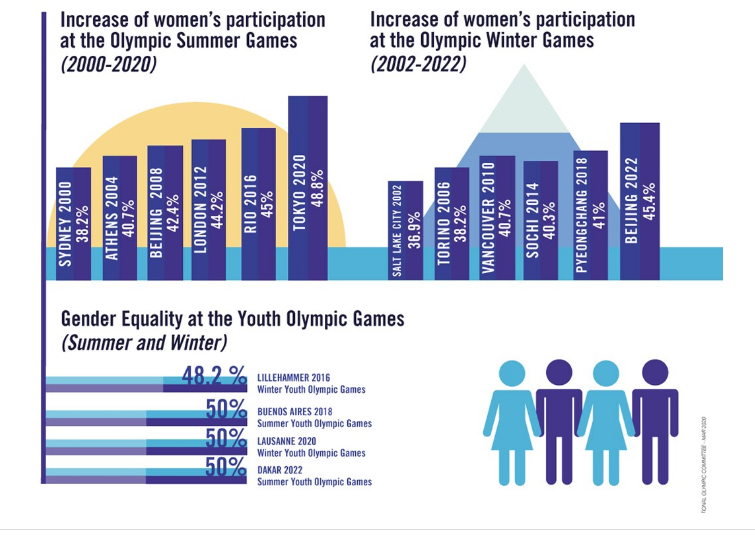 In 1926, Milliat held the second edition of the Women’s World Games in the Swedish city of Gothenburg, with the participation of female athletes from 10 countries. These sportswomen competed in various sports, in contrast to the restrictions in place at the Olympic Games.

Then in 1930, the International Women’s Sports Federation organised the third session of the Women’s World Games, which was also successful. As a result, the IOC took the decision to make some reforms to women’s participation at the Olympics, but on the condition that the International Women’s Sports Federation suspend the Women’s World Games tournament.

In 1934, Milliat held the last Women’s World Games. Although no specific reason was given for this, some sources claimed that this was due to the decline in attention and support these games received. This came off the back of the support and the empowerment women had in taking part in the Olympics Games. Others, however, said that Milliat stopped them for health reasons.

During the period from the 1948 London Olympic Games to the 1972 Munich Olympic Games, female athletes slowly earned their own place in the Olympic programme, increasing their participation in number and in sports. They started to compete in canoeing, equestrian sports, and for the first time in a team sport, namely volleyball.

A victory for women took place in 1979, as for the first time the Convention on the Elimination of All Forms of Discrimination against Women (CEDAW) stipulated the right of women to exercise and participate in sports.

In 1991, the IOC set a condition for sports federations, stipulating that for them to be able to participate in and send athletes to the Olympic Games; they had to include women on their teams.

This conference was important as it gave rise to the Brighton Declaration, an international treaty to support the ongoing development of a more fair and equitable system of sport and physical activity.

In 1996, the IOC also held its first World Conference on Women and Sport. The conference had three main objectives, which were to: assess the progress made in the area of gender equality in sport; create awareness about women’s role in sport; and set future priority actions to promote women in sport. 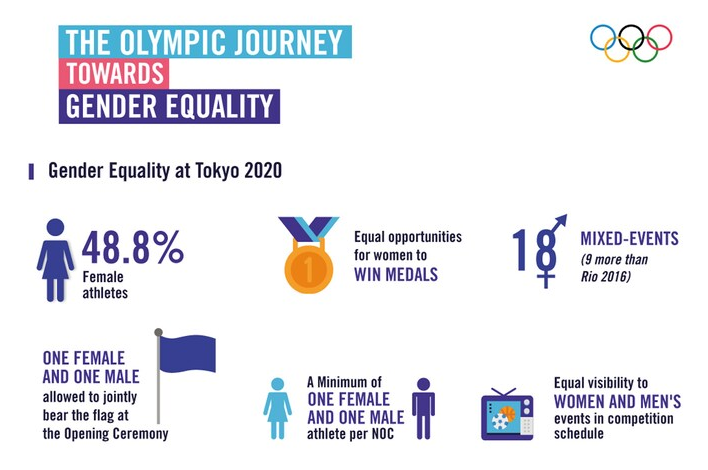 The struggle for female equality either in sports or outside sport continues during the beginning of the 21st century.

A total of 116 years since the first edition of the modern Olympic Games, in which only men were allowed to participate, the 2012 London Games made history by being the first Games with all delegations including female athletes.

The 2012 London Olympic Games was also another victory for women, as it was the first time where women could compete in boxing.

They participated in all sports included in the Olympic Programme, with 16 more competitions for men.

Under Recommendation 11 of the Olympic Agenda 2020, the IOC in 2014 set about  to work with the International Federations to achieve 50 % female participation in the Olympic Games.

This also aimed to stimulate women’s participation and involvement in sport by creating more participation; and, opportunities at the Olympic Games, and also to encourage the inclusion of mixed-gender team events.

In 2016, after the recommendation of the IOC Women in Sport Commission, the IOC Executive Board approved a revised gender equality target to 30% for the Olympic Movement constituents.

It said, “Members of the Olympic Movement are advised to set a minimum target of 30 per cent for women’s representation in their governing bodies by 2020, and to adopt accompanying measures that will help them to reach this goal.”

The number of athletes participating in the 2016 Rio de Janeiro Olympic Games saw a new participation record of 5,176 women out of 11,444 athletes, representing 45% of the total.

In March 2017, the IOC launched the Gender Equality Review Project, with a mandate to review the current state of gender equality in the Olympic Movement. This aimed to “push gender equality globally” with “action-oriented recommendations for change”.

In March 2020, the IOC Executive Board took two key decisions relating to gender equality at the Olympic Games. It noted that all National Olympic Committees (NOCs) should be represented by a minimum of one female and one male athlete at all editions of the Olympic Summer Games, starting with Tokyo 2020.

The IOC protocol guidelines were also changed, to allow NOCs to nominate a female and a male athlete to jointly bear their flag at the Opening Ceremony.

On International Women’s Day 2020, marked every year on 8 March, the IOC announced that 48.8% of the athletes who will participate in the Tokyo Olympics will be women.