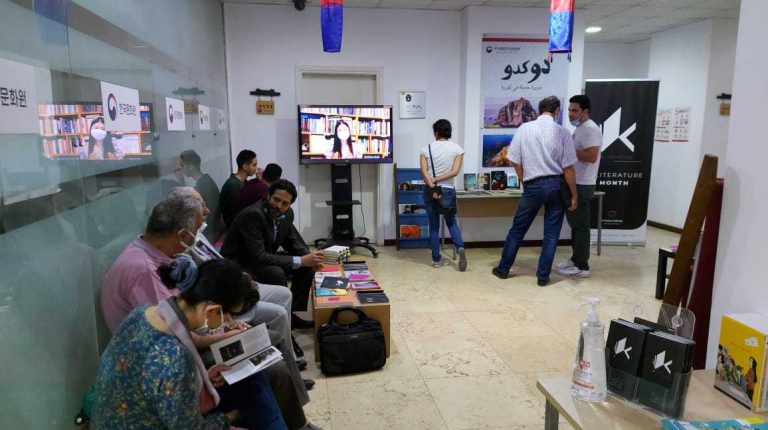 Oh Sung-ho, Director of the Korean Cultural Center in Cairo, has said that Korean literature opens new opportunities for communication and cooperation between South Korea and Egypt.

He called for efforts to take place relating to translation between the Korean and Arabic languages, in order to build bridges between the two countries’ peoples.

He added that he is pleased to organise the event, which attended by a gathering of translators and publishers interested in Korean literature.

The evening was attended by poet and writer Ahmed Fadl Shablul, the poet Ashraf Abu Al-Yazid, and Alaa Fathi, a professor of Korean literature at Ain Shams University, as well as young novelist Nahla Karam.

Fathi said the translation of Korean literature into Arabic began in 2004, with most of the translated works initially focusing on short stories that dealt with the Japanese colonial rule of the Korean peninsula.

In her speech, she elaborated on the stages of Korean literature’s development, from classical to contemporary eras, and the most important literary works that have not yet translated in to Arabic.

She noted that Korean literature has been gaining recognition worldwide, with notable works including Shin Kyung-sook’s Please Look After Mother, Han Kang’s The Vegetarian, and Cho Nam-joo’s Kim Jiyoung, Born 1982.

Shablul said that although there remains inadequate knowledge about modern Korean literature, the works that have been translated into Arabic reveal lofty humanitarian literature. He added that this keeps path with modern techniques in the world of short and long stories.

He also expressed the hope that the Korean Literature Translation Institute, in collaboration with the National Translation Centre in Egypt, would play an active role to strengthen translation work.

This would occur in addition to assisting translators and publishing houses so that those interested could read more Korean literary works in the near future.

The participants agreed that there was an urgent need to adopt an integrated translation strategy between Korean and Arabic languages, to promote cultural exchange between Korea and the Arab world.