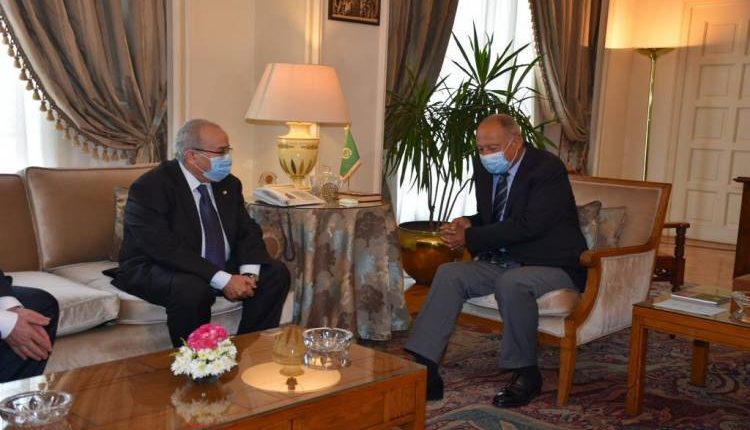 Secretary-General of the Arab League, Ahmed Aboul Gheit, has held talks with Algerian Foreign Minister Ramtane Lamamra, which touched on various Arab and regional issues, as well as preparations for the upcoming Arab summit in Algeria.

A statement issued by the General Secretariat of the Arab League, on Sunday, stated that the meeting comes within the framework of the two sides’ keenness to consult and coordinate in the interest of the success of the next summit.

He added that the Secretary-General pledged to provide all support to Algeria in order for the summit to come out in a manner commensurate with its importance.

During the meeting, Aboul Gheit praised the need to push forward Arab-African cooperation through the mechanisms adopted between the two regional groupings, which maintain a long history of friendship, cooperation and coordination.

The statement indicated that the two sides also discussed the latest developments in the Palestinian cause, where Aboul Gheit valued the well-known Algerian stances in supporting the Palestinians at all levels.

The two sides agreed on the importance of preserving African historical positions in support of the Palestinian cause and the right to self-determination and the struggle against colonialism.

The statement said, “Both Aboul Gheit and Lamamra exchanged views on the Libyan crisis, as their views matched on the important and fundamental role of the neighbouring countries in dealing with this crisis and addressing its consequences.”

They stressed the importance of maintaining the positive momentum generated by the Berlin process, the Berlin 2 meeting, and the various meetings to arrange the situation of the Libyan House, leading to the holding of elections on 24 December as scheduled.

They also discussed the developments of the situation in Tunisia, and agreed to offer full support to Tunisian President Kais Saied in his attempt to maintain stability in Tunisia and implement the will of the Tunisian people.