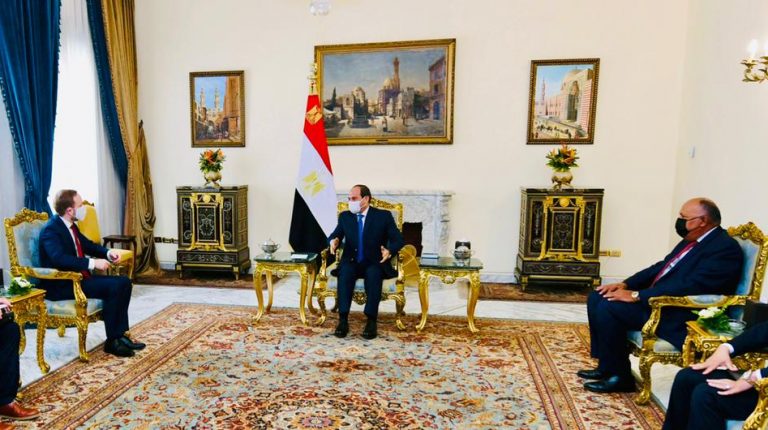 Egyptian Presidency spokesperson Bassam Rady stated that Al-Sisi praised the long-standing relations between the two friendly countries over nearly a century. He also stressed Egypt’s keenness to coordinate positions of both countries on issues of common interest in the regional and international arenas.

The President also expressed Egypt’s interest in developing cooperation with the Czech Republic within the framework of the Visegrad Group, which includes Poland, Hungary, Slovakia, and Czechia.

For his part, Czech Foreign Minister Jakob Kolhanek affirmed his country’s keenness to advance its bilateral relations with Egypt for being an important and basic pillar for stability in the Middle East and Mediterranean regions.

Later, during a press conference with his Czech counterpart, Egypt’s Minister of Foreign Affairs Sameh Shoukry praised the Czech government for its attempt to expand economic cooperation in the region and the willingness of the Czech Export Bank to provide $300m to encourage Czech companies to invest in Egypt.

He pointed out that there are Egyptian efforts to sign a cooperation agreement between the Suez Canal Economic Zone and the Czech side, similar to the agreement signed with the Polish side to use the SCZone as a center for its industrial production.

Shoukry continued: “We discussed regional issues, including Syria, Iraq, Yemen, the Palestinian cause, and work to achieve comprehensive peace in the Middle East and the Eastern Mediterranean. There was a common understanding of the regional challenges and the need for joint action to confront these challenges.”

He added, “We are keen to intensify cooperation with the Czech Republic and work towards stability in the Middle East and Europe.”

Meanwhile, the Czech Foreign Minister said that the Grand Ethiopian Renaissance Dam (GERD) crisis must be resolved without delay because the lives of millions are at high risk in such issues.

“International mediation is needed because time is of importance and an essential element to resolve this issue,” he added.

Kulhaneke expressed his country’s strong encouragement for negotiations and finding a solution for the crisis.