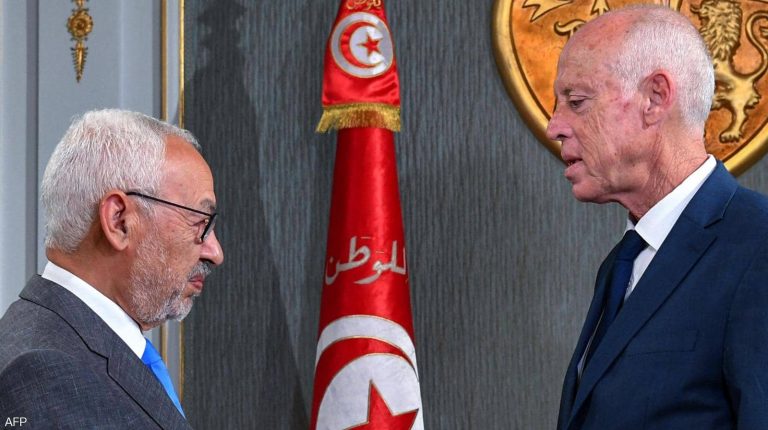 Tunisia has been going through political instability, social unrest, and general frustration in the previous period, but things escalated dramatically on 25 July when President Kais Saied dismissed Prime Minister Hichem Mechichi and suspended the parliament. The move was described by the president’s opponents, especially Islamists, as a “coup”. Using his constitutional powers, Saied also took a set of emergency measures to impose order in the country.

Over the last few days, talks have been intensified between several Tunisian parties, in order to reach a political consensus and a road map to be submitted to Saied to end the current unstable situation as soon as possible.

Several meetings have been held between parties of various political orientations in Tunisia, to address the causes of the crisis that Tunisia has witnessed, especially since the 2014 Constitution.

The People’s Movement, which strongly supported Saied’s decisions, led consultations with various parties, to reach a common ground to strengthen the pro-Saied front.

MP Abdul Razzaq Oweidat, from the People’s Movement, said in press statements, “Our meetings with the parties aim to lay down a road map with the president to clarify the path, and to be aware of developments with the presidency.”

Oweidat continued, “We want to make sure that there is no going back, and we’re waiting for the president to announce the name of the prime minister who will lead a government whose mission is to get Tunisia out of its health crisis and activate the role of the judiciary in facing corruption and terrorism files.”

On the other hand, Tunisian writer and political analyst Belhassan Yahyaoui said, “The pillars of correcting the course are the formation of a government, which must be actually responsible to the President to achieve what must be achieved.”

The Tunisian street views with apprehension the indirect threats made by some parties, especially the Muslim Brotherhood-affiliated Ennahda Movement, to launch mass protests and facilitate large waves of illegal immigration to European neighbours.

Saied’s movements enjoy broad popular support, as they aim to combat corruption and fight political paralysis and economic stagnation that has been going on for years, according to the president’s supporters.

Moreover, demands increasing in Tunisia to dissolve the Brotherhood’s Ennahda Movement, which participated in ruling the country for about a decade, for being allegedly involved in many financial and political corruption files.

Many called for the law to be applied to the Brotherhood movement, similar to what happened with the ruling Constitutional Democratic Rally Party, which was toppled by mass protests in 2011.

Journalist and writer Akram Belkaid said that while Tunisia is not a major regional player, it is seen as a beacon of hope for democratic transformation in the Arab world.

Belkaid added, “Tunisia is the only Arab country that has a certain degree of democracy. There are free elections and people are protesting without fear of going to jail. Just compare it to other countries in the region that are either mired in civil wars or live under dictatorships.”

He believes that some of Tunisia’s problems stem from unfulfilled hopes and promises in the post-Arab Spring era.

“Tunisia is the only success story of the Arab Spring, but there is still a lot of work to be done,” he added.

Belkaid believes that President Saied’s decisions to dismiss the government and suspend the parliament may undermine Tunisia’s political gains from the 2011 Revolution.

He explained, “It is not a good fit for me in the arms of democracy. Once this is done there may be a temptation to go further.”

Tunisian Lawyer and human rights activist Yassin Azza confirmed that dozens of lawyers are preparing to file a lawsuit in court in Tunis against the Ennahda Movement and demand the freezing of its funds.

He continued, “The law must be applied to everyone. Ennahda is involved, according to an Audit Department’s report, in financial corruption and in receiving foreign funds, which is a clear violation to the Tunisian law.”

Azza said that a number of lawyers are in the process of collecting evidence condemning the movement, “such as the report of the Court of Accounts and the report of the judges’ inspection of the case of Public Prosecutor Bashir Al-Akrimi, who is considered the pawn of the renaissance within the judiciary system.”

He added that the evidence also includes “sending young people for jihad in Syria, in addition to what happened on 25 July, when the movement’s leader, Rashid Ghannouchi, incited his supporters on social media platforms to storm the parliament building.”

There are widely differing views in the Tunisian street on President Saied’s decisions. For many, it seems like the beginning of a hopeful phase after a year of chaos. For others, this is a constitutionally questionable step with potential repercussions that could destabilise the country and have far-reaching consequences.

Tunisia’s political crisis has deeper roots. Since the overthrow of President Ben Ali in 2011, nine governments have ruled the country, some for only a few months.

Saied, a constitutional law professor with no prior political experience, ran as an independent candidate and won the 2019 presidential election by an overwhelming majority.

She explained, “Saeid came to power with great popular support, receiving more than 72% of the vote, which reflects the people’s dissatisfaction with the country’s previous political establishment. He also enjoys a large popular base among Tunisian youth who have been disillusioned with party politics.”

President Saeid appointed Mechichi as prime minister in July 2020 after the resignation of his predecessor, Elyes Fakhfakh, who held the position for only five months. Saied and Mechichi were always at odds with Fakhfakh.

The recent legislative elections, that took place in 2019, did not lead to any party achieving an absolute parliamentary majority, a situation that left no other choice but to form a coalition government of several parties from different political spectrums, sometimes with different positions in various fields and political issues.

During the past few days, President Saeid issued a presidential decree officially dismissing key ministers, including those responsible for interior, defence, and justice, and quickly appointed the head of presidential security to oversee the Ministry of Interior, which was headed by Mechichi.

Saeid also warned anyone who incites people to protest against his decisions and stressed that the Armed Forces will face anyone who resort to violence. The clashes between supporters and opponents are limited so far, but the risk of violence in the coming days cannot be ruled out.

Tunisian President Saied stressed, on Saturday, that “there is no room in the country today to confiscate funds.”

Saied’s speech came during his reception this afternoon at Carthage Palace to Mohamed Al-Aqrabi, President of the Tunisian Professional Association of Banks and Financial Institutions, who was accompanied by the association’s members Mona Saeed and Hisham Al-Rubai.

The Tunisian economy was in crisis before the outbreak of the coronavirus pandemic in the country, and the impact of the health crisis on the national economy and local small businesses was very large.

The unemployment rate rose to about 18%, according to official statistics, and youth unemployment jumped to more than 36% at the end of 2020.

One of the biggest economic problems facing Tunisia is that tourism, one of the most important economic sectors in the country, has been severely affected by the pandemic.

The manufacturing sector was also severely harmed. The Tunisian economy contracted by 9% in 2020.

Belkaid said, “Tunisia is a country with limited resources and in need of investment. The economic situation is very difficult and has deteriorated further over the past months.”

But the problems of the faltering economy may be exacerbated further with recent developments. He added, “The people have been waiting for job opportunities since the revolution, but the economic problems have not been addressed until now.”

Tunisians are increasingly frustrated with their government’s handling of the coronavirus pandemic. Death rates from the virus in Tunisia are the highest in the Middle East and North Africa region, according to the World Health Organization statistics.

According to data from the “Our World in Data” website, which tracks vaccination programmes around the world, less than 8% of the country’s population of 11.9 million had been fully vaccinated as of 25 July.

A week ago, Tunisia recorded the highest daily death rate since the beginning of the epidemic.

“We are in a catastrophic situation … the health system is collapsing, and we can only find a bed in hospitals with great difficulty,” Health Ministry spokesperson Ensaf Ben Alaya said recently.

“We are struggling to provide oxygen and the doctors are suffering from unprecedented exhaustion,” she added.