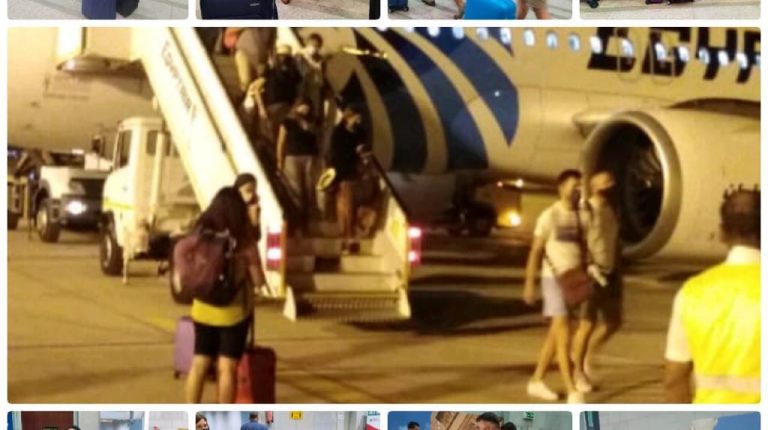 On Saturday evening, Luxor received the first charter flight from Spain after 17 months of suspension.

International flights at all Egyptian airports nationwide were suspended on 19 March 2020 as part of government efforts to curb the spread of the novel coronavirus (COVID-19) pandemic.

Inbound flights only resumed on 1 July 2020 to three governorates as part of a first stage, namely the Red Sea, South Sinai, and Matrouh governorates. Tourism activities to Luxor and Aswan resumed in early September, with floating hotels allowed to resume work on 1 October.

The Egyptian Tourism Promotion Board office in Luxor received the tourists of the first charter flights from Spain to Luxor with flowers.

Eman Mahmoud, head of the Central Department of Internal Tourism at the authority, indicated that the plane coming from the Spanish capital Madrid was carrying 114 tourists.

She added that it is scheduled to operate two chartered flights per week from Spain to Luxor, starting next week until October of this year.

Meanwhile, Luxor also received the first charter flights from France to Luxor after the resumption of the incoming tourist movement to Egypt since the beginning of July 2020 on today’s fagr?

Mahmoud indicated that the plane coming from the French capital, Paris, was carrying 178 French tourists.

She added that a charter flight is scheduled to operate once a week from France to Luxor until November of this year.

Mahmoud said that the members of the authority’s office in the city welcomed the tourists of both flights and presented roses, souvenirs and propaganda materials. These propaganda materials introduced them the various Egyptian tourist destinations and the different tourism products for the Egyptian destinations, while adhering to all preventive and precautionary measures and health safety controls.