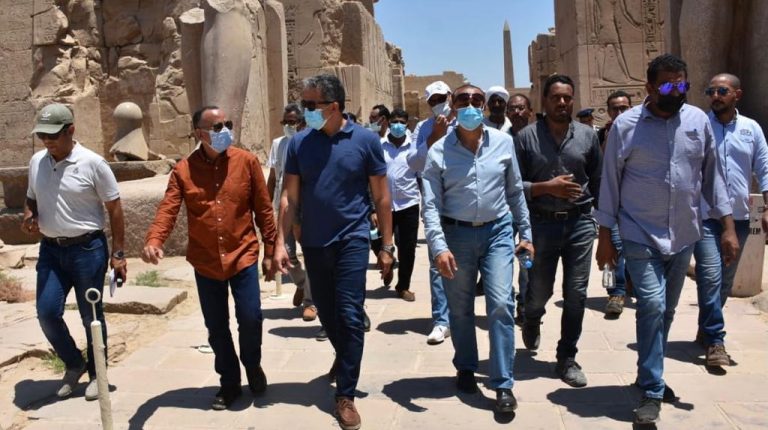 Khaled El-Anany, Minister of Tourism and Antiquities, has inspected the Karnak Temple Complex in Luxor to follow up on the development works in the archaeological site.

He also checked on the ongoing restoration of the Rams Road (Avenue of Sphinxes) which will be reopened for visitors before the end of the year.

The Minister met with members of the House of Representatives and Senate in Luxor to discuss several issues related to the development of Luxor in preparation for the opening ceremony of the Rams Road.

El-Anany ordered raising the efficiency of the services provided to the Karnak Temple visitors.

He directed for developing the on-site maps and signage at the archaeological site, including an illustration of the visit’s path and the most important monuments in the area as well as visit instructions, especially those related to preventive measures and safety controls to prevent the spread of the novel coronavirus.

In addition, he ordered raising the efficiency of bathrooms, lighting systems, and corridors for people with special needs, as well as adding more seats and umbrellas for the convenience of tourists.

He also stressed the need to develop the areas and corridors surrounding the Karnak Temple.

Moreover, the Minister inspected the ongoing restoration works of the tremendous pillared hall in the Karnak Temple, as well as the restoration of the statue of King Thutmose II in front of the Eighth Pylon.

During his tour, El-Anany met with a group of tourists of different nationalities, including Brazil, Germany, France, Belarus, Ukraine, and Russia, who expressed their admiration of the Ancient Egyptian civilization. They also praised the accurate application of preventive measures and safety controls in hotels, archaeological sites, and museums which helped them feel comfortable, safe, and enjoy their vacation.

Earlier, El-Anany announced that before the end of the year, Egypt will reopen the 2,700-metre-long Avenue of Sphinxes, a road that connects the Karnak and Luxor temples in the east of Luxor.