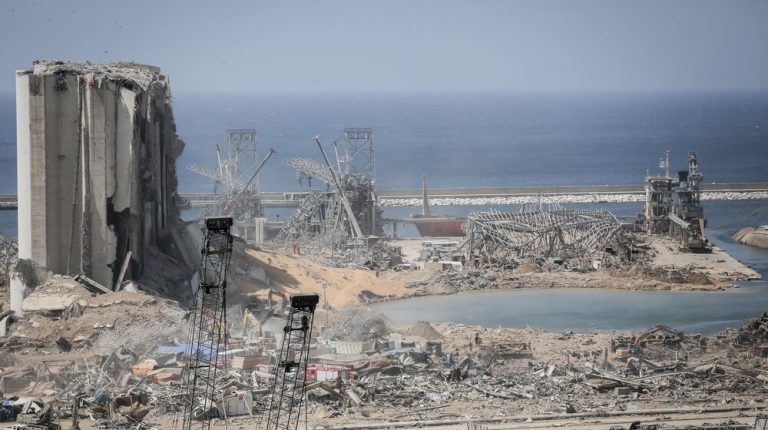 Egypt’s President Abdel Fattah Al-Sisi participated, via video conference, in the international conference in support of the Lebanese people, that took place based on an initiative by French President Emmanuel Macron.

President’s spokesperson Bassam Radi stated that the president sent a message to the brotherly Lebanese people, “that Lebanon, which has always been a beacon of culture, art and thought, and an important tributary of Arab creativity, is still able with the determination of its people to rise from the current setback, and to return again to be thriving and unique as we wish and love to see it”.

The president also said that “Egypt’s hands are extended to the international community to join hands and harness all our capabilities to support Lebanon and build a better future for its people.

On Tuesday, the donors’ conference for Lebanon took place virtually at the invitation of France and under the auspices of the United Nations. It is its third conference since the “For Lebanon” explosion, during which it hopes to raise $ 350 m and coincide with the anniversary of the Beirut explosion on 4 August.

During the conference, Macron criticized the political class in Lebanon, accusing it of pursuing its own interests without the interests of its people, noting that the situation in Lebanon is constantly deteriorating.

In a speech, Macron revealed that Paris will provide €100m in food aid and support the educational, agricultural, and health sectors, and present 500,000 doses of coronavirus vaccine, pledging also to contribute to the rebuilding of the port of Lebanon.

He pointed out that the crisis in Lebanon is caused by corruption, calling for the formation of a government, finding settlements and implementing the road map.

On Wednesday, the Lebanese commemorate the first anniversary of the explosion in the port of Beirut on 4 August 2020 which killed 214 people, amid the deteriorating economic situation and political stalemate.

The French Foreign Ministry had said last month that Macron would organize the conference in cooperation with the United Nations “in response to the needs of the Lebanese, whose situation is deteriorating every day.

This assistance will include, in particular, the educational and agricultural sector and food commodities, as the French President stressed when he opened this video conference, which he co-chairs with the United Nations, on the first anniversary of the explosion in the port of Beirut.