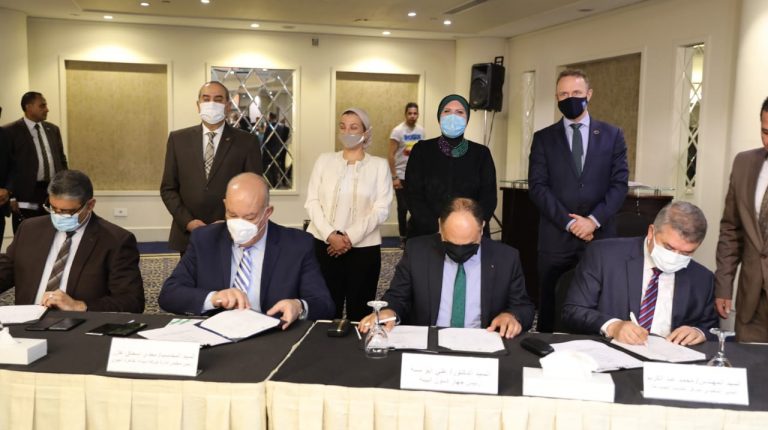 Egypt’s Ministries of Environment, Trade and Industry, and Civil Aviation have signed a cooperation protocol to provide technical and financial support for the supply, implementation and operation of small grid-connected solar cells and chargers equipped with solar-powered display screens at Cairo Airport.

The project is implemented with financial and technical support from the EEAA and the national project for small grid-connected solar cell systems implemented by the IMC in partnership with the United Nations Development Program (UNDP) and funded by the Global Environment Facility.

During the signing ceremony, the Minister of Environment Yasmine Fouad, stressed that integrating the environmental dimension into the civil aviation sector is among the priorities of the state to work on more sustainable airports, as the integration of the environmental dimension into the policies and various sectors of the state has become tangible and cannot be dispensed with or ignored.

Fouad explained that the project depends on the construction of stations in certain places to operate the chargers, as Cairo International Airport is the face of the state and the first impression in the minds of visitors to the country.

She noted that the project consists of small solar cells connected to the network and chargers equipped with solar-powered display screens at the airport, and the installation of the measurement system necessary to measure the performance indicators of the solar system and the rates of electricity exchange from the solar cell system to the electrical network.

The Minister of Environment explained that the expected benefits of the project include an environmental return in the form of emissions reduction, a social and educational return through the generation of electric power using solar energy, and an expected economic return as a result of the expected savings from electricity bills.

For her part, Minister of Trade and Industry Nevin Jamei, said that the protocol supports the ministry’s directions aimed at deepening the local manufacturing of industries with a high added value and a high technological component, including the manufacture of components for solar power plants, especially in light of the state’s direction towards diversifying energy sources and increasing reliance on new and renewable energy.

Jamei pointed to the pivotal role played by the IMC in implementing the Egypt-PV small solar cell systems project, through which it provides technical and material support for the deployment of small solar energy systems nationwide.