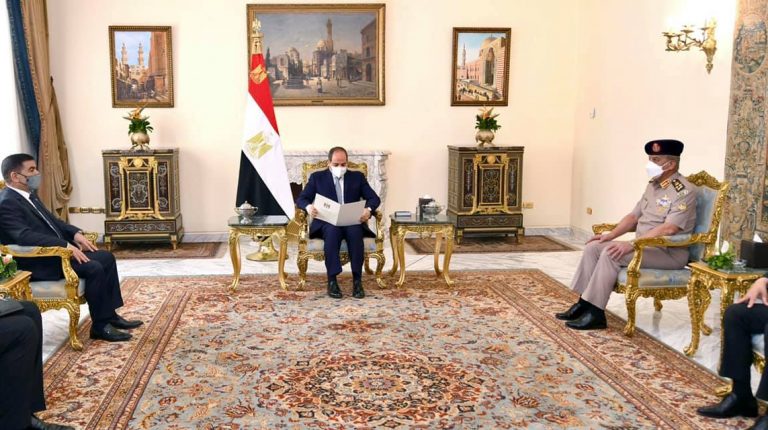 Egypt’s President Abdel Fattah Al-Sisi received on Saturday, the Lieutenant-General Jumma Inad Saadoun, the Minister of Defence of the Republic of Iraq. The meeting was held in Cairo and touched on various issues of mutual concern for Cairo and Baghdad.

Egypt’s Minister of Defence and Military Production, Lieutenant-General Mohamed Zaki, attended the meeting according to a statement from the presidency spokesperson Bassam Rady.

The meeting dealt with bilateral military cooperation, including joint training programs, exchange of experiences and raising capabilities. It also tackled several Arab and regional issues and files of common interest.

Rady stated that the Iraqi minister conveyed a letter to President Al-Sisi from the Iraqi Prime Minister Mustafa Al-Kadhimi, which included an affirmation of Iraq’s appreciation for the Egyptian efforts in support of Iraq.

Al-Kadhimi also expressed an aspiration to strengthen cooperation with Egypt to benefit from the Egyptian success development experience.

He further hailed the Egyptian role in support of Iraq especially with regard to facing common challenges, foremost of which is combating terrorism and achieving security, stability and development.

Moreover, Al-Sisi has asked to convey his greetings to his Iraqi counterpart Barham Salih, and the Iraqi Prime Minister Al-Kadhimi.

He stressed Egypt’s keenness to cooperate with Iraq in all fields, within the framework of the constants of Egypt’s policy by supporting Iraq, strengthening its Arab national role. The Egyptian policy aims to help Baghdad to overcome all challenges, combat terrorism, and maintain its security and stability.

In June, President Al-Sisi made a historic visit to Baghdad, in the first visit by an Egyptian president to Iraq in 30 years, which reflects the strength of the historical relations between Egypt and Iraq.

The visit was for the president’s participation in the tripartite summit between Egypt, Iraq and Jordan. The summit was held with the participation of King Abdullah II bin Al-Hussein, of Jordan and Prime Minister of Iraq Al-Kadhimi.

The summit dealt with ways to enhance joint tripartite cooperation between the three countries, as well as intensifying consultation and coordination on the latest political situation in the region.