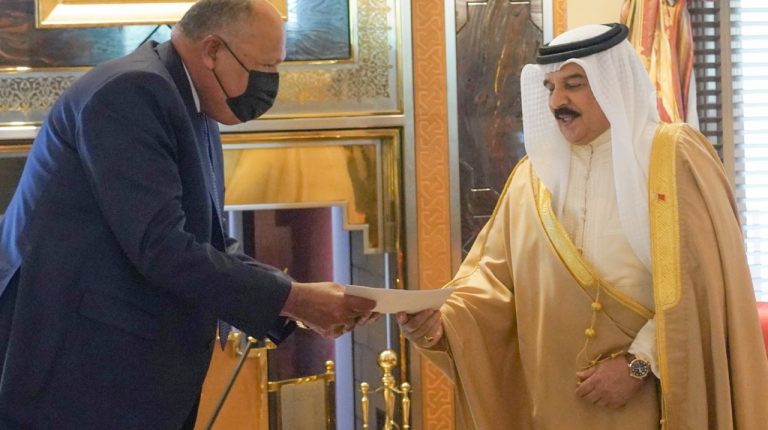 Ahmed Hafez, the spokesperson for Egypt’s Ministry of Foreign Affairs, affirmed that strength of brotherly ties between the two countries, which were reflected in the distinguished level of cooperation in various fields.

Minister Shoukry stressed Egypt’s keenness on boosting coordination and consultation with Bahrain regarding the regional developments, within the framework of the two countries’ efforts aimed at bringing about peace to the region.

He clarified that Egypt always prefers political solutions to the region’s crises, without interference in internal issues, highlighting Egypt’s firm stance towards the security of the Arab Gulf, being an integral part of Egypt’s national security.

For his part, King of Bahrain praised the close historical relations between the two countries, as well as the consensus of visions towards the current regional challenges.

He affirmed his country’s solidarity with Egypt in preserving its water rights, and that Bahrain supports all efforts and endeavors aimed at reaching a legally binding agreement regarding the Grand Ethiopian Renaissance Dam (GERD) in accordance with the international law.