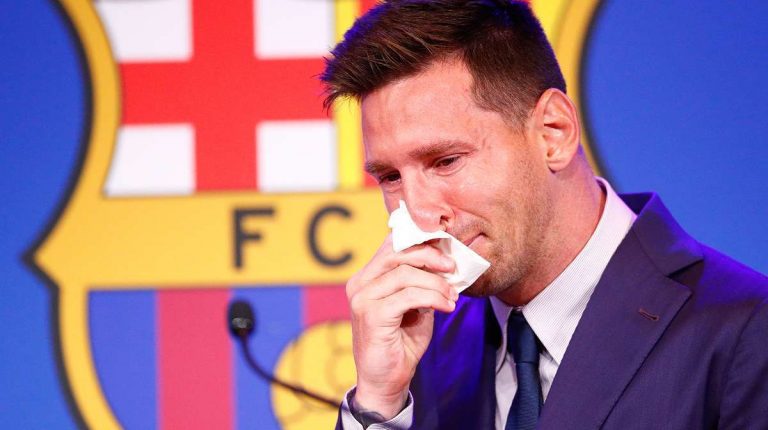 A tearful Lionel Messi said goodbye to FC Barcelona after 21 years at the club at an emotional press conference at the Camp Nou Stadium, attended by his now former teammates on Sunday.

The news Messi would not be signing a new contract with the club that he joined as a 13-year-old and scored a record 672 goals for shocked football when it was confirmed on Thursday. The striker confirmed the reason he was leaving was because the club could not fit his contract into the tight wage ceiling imposed by La Liga due to Barca’s massive debts.

Barcelona president Joan Laporta confirmed on Friday that the club would lose over 480 million euros due to the COVID-19 pandemic, on top of previous debts of around 1,000 million euros, and explained he couldn’t mortgage Barca just to keep Messi.

“I did everything possible and so did the club, but we couldn’t do it because of La Liga. All I know is that the club couldn’t get around the league’s rules because of its debts and because the club did not want to go into debt more,” confirmed Messi.

“The club does not want to borrow more, so why make this drag on if it is an impossible case, and the league did not allow it either? I also have to think about my future and what I have to do now,” he added, making reference to his attempts to leave a year ago, due to his poor relationship with former president Josep Maria Bartomeu.

“Last year, I didn’t want to stay and I said it; this year, I wanted to stay and we couldn’t,” he said, explaining he had been willing to take a 50 percent pay cut in order to stay.

Messi insisted that in his 21 years at FC Barcelona, the club had given him everything.

“I am sad because I have to leave this club at a time when I did not expect it. Last year I wanted to leave, but not this year. That’s why I’m so sad,” he continued.

The striker has been linked with a move to Paris Saint-Germain and said there was a possibility that could be his destination, but insisted there was nothing signed.

“I have nothing arranged with anyone: when the statement [about me leaving] came out I got a lot of calls from several clubs that were interested, I still have nothing finalized,” commented the striker, who said that he would return to the city.

“We are going to return, because it is our home. and I have promised that to my children,” he concluded.