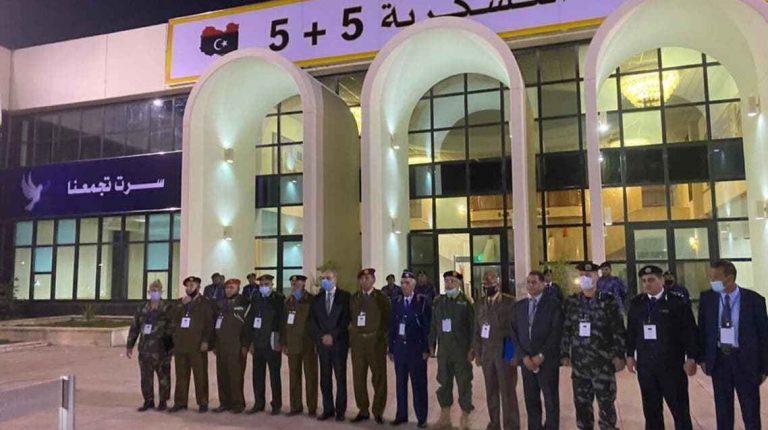 The 5+5 Joint Military Committee has agreed on an emergency plan for the withdrawal of mercenaries and foreign forces, the committee said in a press statement.

The statement officially requested that the Government of National Unity and the Presidential Council to “freeze military agreements and memorandums of understanding with any country as stipulated in the ceasefire agreement signed in Geneva.”

This development is considered  as  an important step for implementing the ceasefire agreement, stabilising the country and unifying the military institutions.

This came at the conclusion of its meeting, which was held in the city of Sirte in central Libya on Saturday.

The meeting tackled foreign mercenaries and the exchange of detainees, in addition to appointing a consensual figure to head the Ministry of Defence.

It is noteworthy that Prime Minister Abdel Hamid Dabaiba has held the position of Minister of Defense since the formation of the government last March.

The committee also called on the Libyan Political Dialogue Forum (LPDF) to agree on a constitutional basis for the general elections in December 24 as soon as possible, warning that LPDF’s failure to do so would result in the collapse of the UN-brokered ceasefire.

Furthermore, the committee added that it was also agreed to exchange detainees who were arrested during the military operations, in the coming days.

Arrangements have also been made to start completing the second phase of mine clearance on the Sirte-Misrata road.

In the UN-facilitated LPDF, which took place in Tunisia last November, participants agreed on a roadmap to credible, inclusive and democratic national elections, to be held on 24 December 2021.

In July, independent UN human rights experts said that the continued recruitment and presence of mercenaries in Libya is impeding “progress in the peace process” and an obstacle to upcoming elections, calling for their “long overdue” departure.