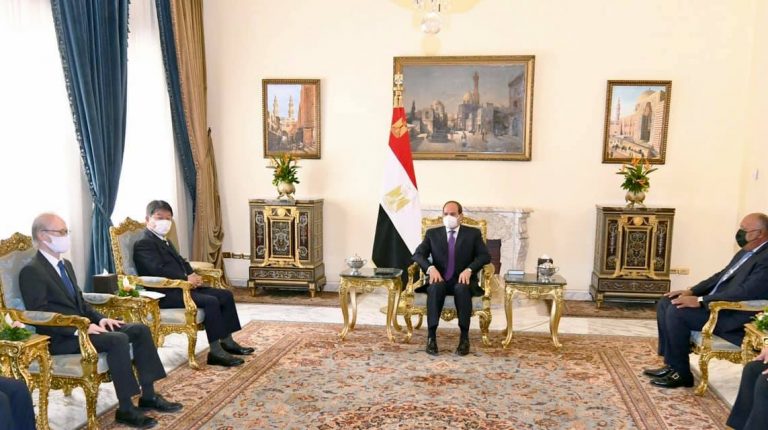 During the meeting, Al-Sisi expressed Egypt’s interest and keenness to develop bilateral cooperation with Japan, especially in economic and investment fields, and to attract more Japanese investments in Egypt.

The meeting also tackled several regional files of common interest, as the Japanese official expressed his country’s support for the Egyptian efforts to combat terrorism and extremism in the Middle East, as well as its effective role in the Palestinian cause.

Moreover, they exchanged views on the latest developments in Afghanistan.

Both agreed on the importance of political settlement to different regional crises, stressing the need for continued consultation and coordination between the two sides in various international frameworks and forums, especially with regard to the next session of the Japan-Africa Summit “TICAD”.

The summit will be held in Tunisia in 2022, in order to consolidate the success of the joint presidency between Egypt and Japan for the seventh session of the TICAD Summit, which was held in Yokohama in 2019.

Motegi also affirmed his country’s aspiration to strengthen economic relations with Egypt and increase the volume of Japanese investments in light of the economic growth and comprehensive development movement Egypt is witnessing.

Meanwhile, Egypt’s Minister of Foreign Affairs Sameh Shoukry expressed his country’s aspiration for more coordination and consultation with Japan to enhance stability in the Middle East.

Shoukry noted that his talks with his Japanese counterpart dealt with regional issues, including the Palestinian issue and the situation in Libya and Yemen.

He added that he stressed to his Japanese counterpart the necessity of freeing the world from nuclear weapons, supporting Japan’s efforts to enhance development efforts in the African continent and preparing for the TICAD Summit next year.

Shoukry expressed Egypt’s appreciation for Japan’s policy to achieve stability at the regional and international levels, and its support for the Aswan Forum and the Cairo Peace Center

He also appreciated the continued support of Japan with the participation of its forces in the peacekeeping forces in Sinai. In addition, Shoukry praised Japan’s success in organizing the recent Olympic Games in Tokyo.

For his part, the Japanese Foreign Minister said that the talks in Cairo dealt with the latest developments in Afghanistan, adding that it was agreed to coordinate with Egypt in this regard due to the country’s pivotal role in the Islamic world.

Motegi affirmed Japan’s continued cooperation with Cairo in regard to the Grand Egyptian Museum project. He pointed out that Japan also contributed to the development of the Suez Canal economic zone.

Meanwhile, the Foreign Ministers of both countries discussed boosting bilateral cooperation to achieve stability in the Middle East and Africa.

Police in Zambia appeal for calm as violence erupts