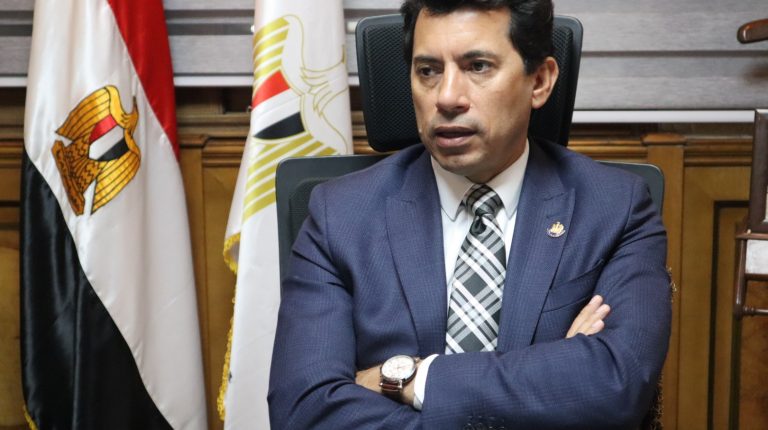 The Tokyo 2020 Olympic Games came to an end on 8 August after 18 days of intensive competitions with the participation of 134 Egyptian male and female athletes, the largest mission representing the Pharaohs throughout history in the Olympics.

Egypt achieved a total of six medals including one gold, one silver, and four bronzes, marking the largest number of medals secured by the nation’s champions in an Olympic Games tournament.

However, the results were unsatisfactory for the Egyptian street in light of the large number of Egyptian participants. Therefore, the search for a scapegoat began, as usual, after the end of each Olympic edition.

Daily News Egypt sat down with Ashraf Sobhi, Minister of Youth and Sports, who assumed his position on 14 June 2018, to learn about his thoughts of the pervious Olympics and Egypt’s plans for next competitions.

What is your assessment of the Egyptian mission participating in Tokyo 2020?

The ambition of every player is to qualify for the Olympic tournaments, and Egypt succeeded in being present in the Tokyo 2020 with a large number of athletes, reaching 134 from 23 sports federations, some of whom were able to reach the podiums. Others succeeded in difficult competitions, and presented honourable performance.

Are you satisfied with the number of medals achieved by the Egyptian mission?

Our expectation before the Olympics was to get from three to five medals. It would have been possible to increase the number of medals had it not been for the draw that did not serve the Egyptian champions in many competitions and put them at the beginning of their paths in front of world champions.

Did postponing the Olympics affect the results of the Egyptian mission?

The postponement of the Olympics due to the Coronavirus pandemic had an impact on all countries, especially after the cessation of sports activity in the world for a period exceeding 6 months, which had a negative impact on all players. We succeeded, to a large extent, in facing this pandemic through the codes that were used for the return of activity Sports in Egypt in cooperation between the Ministry of Youth and Sports, the Ministry of Health and the relevant state institutions.

How did you assess the performance of the handball team?

The handball team is a special case in the Tokyo 2020 Olympics, and its presence amongst the world champions is a natural and worthy thing after the recent results it achieved during the previous years at the youth, junior and adult levels. President Abdel Fattah El-Sisi’s praise of them is a good supporter of their successful career. It was only one game that separated them from reaching the final – one match against France. They came out with their heads held high after a strong performance despite the defeat and they will have a great honor worthy of them as the first Arab and African team to reach the golden square in an Olympic tournament.

How did you see the achievements of Hedaya Malak, Giana Farouk, Seif Issa, and Kisho?

I congratulate them for winning bronze medals in their respective sports.

These champions had determination and we expect more from them at the Paris 2024 Olympics. We have developed new plans to prepare these champions to preserve them during the next stage to continue victories at the continental and international levels.

I would like to emphasize that the great support provided by President Abdel Fattah El-Sisi to sports and Egyptian youth, and his follow-up on the participation of Egypt’s champions in international tournaments motivated players to provide the best performance.

Is the ministry’s role limited only to financial support for federations and the Olympic Committee?

The state, represented by the Ministry of Youth and Sports, did not spare the players, federations, and the Olympic Committee any financial or technical support to prepare the players to compete in the Olympic competitions, whether in external camps or the use of foreign coaches. Our role is inseparable in the financial and technical follow-up.

What about the rewards for Olympic medallists?

All players who have won medals will be financially honoured according to the regulations. The ministry is studying increasing the financial reward of the heroes to 50% in appreciation for their great efforts.

How did you see some players’ criticism of sports federations on social media after the tournament?

Some players, after exiting competitions, try to gain sympathy on social media and promote false information. They will be held accountable, especially since they all received good preparation programmes.

How are you preparing for the 2024 Paris Olympics?

We started preparing for the Paris 2024 Olympics in 2019 in parallel with the preparations for the Tokyo 2020 Olympics, but we stopped due to the Coronavirus pandemic. We have only three years before the Paris 2024 Olympics, and there is a large group of champions who appeared at a distinguished level in Tokyo who will be better after gaining experiences from participating in Japan in order to achieve an Olympic medal in the next session in France.

When will we reap the fruits of the Olympic champion project?

The Olympic Champion is a national project supported by the state in various games, whether individuals or teams, that has been prepared by specialists in all games so that it is the nucleus on which the sports teams depend during the next stage. Its results are promising. And the fruits will be reaped during the Olympic participation 2024 and 2028 and the emergence of a new generation of Olympic champions of whom we are proud and able to raise the name of Egypt in international forums.

Through the project, we work on discovering and nurturing the talent and give them expertise in parallel with the interest in sports facilities to reach a new era in sports and follow scientific methods in preparing players and overcoming all the difficulties in front of them in order to compete seriously in international and continental championships.

What are the criteria for selecting players to join the Olympic Champion project?

Players are selected using modern scientific methods. They are subject to several physical tests and measures, and technical skill measures, in addition to the other physiological health. The player is placed in one of 11 games, including wrestling, boxing, and squash, and according to the results of the tests that each rising player undergoes, the appropriate game is chosen for each.

What is your comment on the Olympic football team’s exit from the quarter-finals?

The Olympic team performed well, qualified for the quarter-finals and went out against Brazil after losing with a goal. It could have been successful but in the end it lost with a goal, and the team achieved distinguished results in the last period, as it is the African champion, and achieved the African Under-23 Championship Youth, and qualified for the Tokyo Olympics.

What is your vision for the current generation of the Olympic football team?

Attention must be paid to the current generation, because it includes a distinguished group of players, and it will be a strong nucleus for the first team, and we will discuss with the Football Association how to form a new team in order to prepare for the Paris 2024 Olympics.

Is Egypt able to organize an Olympic Games?

We are very good in organizing and we have infrastructure and sports facilities at the highest level comparable to those in the major countries, and even superior to them. From my previous experience in organizing the African Cup of Nations for adults and under 23 years and hosting world championships in handball, shooting, pentathlon and gymnastics, we are able to host any global sporting event.

What is your comment on the phenomenon of Egyptian players playing for other countries in the Olympics?

Since I was assigned the ministerial portfolio in 2018, I closed this file completely because the period prior to my appointment witnessed the travel of some wrestling and weightlifting players, and those who ran their federations at the time should have been held accountable.

What are the measures taken by the Ministry to end this phenomenon?

We laid the foundations for preserving our athletes, providing them with all support to overcome obstacles and difficulties.

Why was Mahmoud Mahgoub assigned to manage the weightlifting federation, despite his previous failure?

The Olympic Committee is the supervisor of the weightlifting federation until the elections, because I refused Mahgoub to take responsibility and the federation is in a state of dissolution after the prosecution’s investigations, and there will be a special look at the weightlifting system and the return of the players to the podiums again.

When will sports federations and clubs hold their elections?

The elections will be held on time after the Olympics, and we are working to hold all elections in federations and clubs during the coming period.

What about the Football Association’s elections?

FIFA informed the Egyptian Football Associationof the decision to extend the tenure of the current normalising committee headed by Ahmed Megahid until 5 January 2022. We will discuss with the committee holding elections before the end of this year, according to the Sports Law which does not conflict with the international charters of the International Federation or the International Olympic Committee.

Once a dream, gender equality at Olympic Games becomes reality