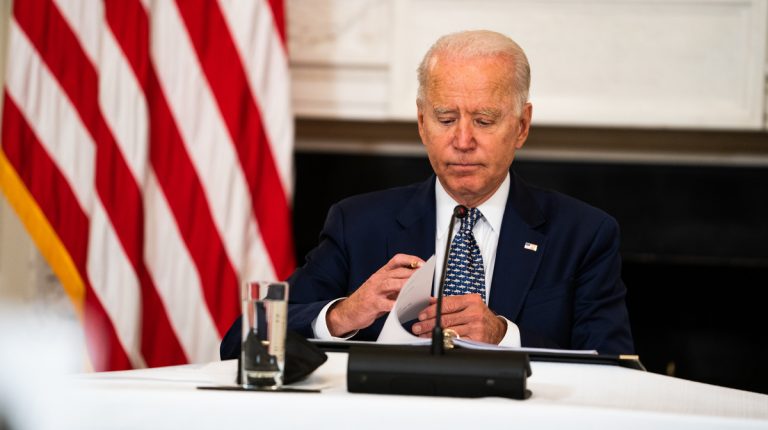 US President Joe Biden will host a “Democracy Summit” in December, the White House announced a few days ago. It added that the December summit “will move commitments and initiatives on three key issues: defending against authoritarianism, fighting corruption, and promoting respect for human rights.” Once again, the United States uses democracy as a flimsy excuse to extend its influence over the world.

It is a striking irony that the White House announcement comes shortly after the Taliban movement took control of Afghanistan’s capital, Kabul, and managed to enter the presidential palace. This indicates the extent of the chaos left by the US in Afghanistan, which it invaded basically to establish democracy and eliminate terrorism.  This also confirms that the primary goal of all American administrations is to protect American interests only, even if at the expense of human rights and the interests of other peoples, as Washington, in the end, could not spread its democratic model in countries such as Iraq and Afghanistan, but left them in a state of chaos that eventually led to the emergence of a group like the terrorist organization “ISIS”.

In fact, the idea of ​​controlling the world under the pretext of democracy is outdated, and all US presidents used this argument to interfere in the affairs of other countries and protect American interests.

For example, President Wilson (1913-1921) declared that the United States would enter World War I to make the world safer for democracy. The administration of President Carter (1977-1981) also adhered to human rights and democracy as a determinant of American foreign policy, for several reasons, the most important of which is that spreading freedom around the world is in line with American interests, and expanding the dissemination of human rights and democratic values ​​in the world will lead to strengthening American security.

Later, the Reagan administration (1981-1989) established the National Democratic Institute and the International Republican Institute to provide technical and material assistance to democracy programs abroad as well as the National Democratic Fund, which seeks to support democratic trends in communists and non-communist countries. Obviously, the main objective was to confront the communist bloc and its economic influence, not to establish the values of democracy for the sake of humanity, as the United States has always claimed.

In the same context, President Clinton (1994-2001) considered that expanding democracy in the world could replace the policy of containment, as an alternative and governing strategy for US foreign policy in the post-Cold War era. Furthermore, On September 27, 1993, President Clinton spoke about what he called “democratic expansion,” and this principle resulted in the emergence of three documents under the name “National Security Strategy for Intervention and Expansion” in the years 1994-1995-1996. This strategy is based on aggressively intervening in all parts of the world to open External markets, that is, “the strategy is democratic expansion as a mechanism to win more markets.”

More importantly, the allegations of spreading American democracy during the administrations of “Bush Sr.”, “Bill Clinton” and “Bush Jr.” as well as “Barack Obama” did nothing but sow death and destruction in most regions of the world, such as the Middle East, for example, which has reached a state of chaos and is not expected to end soon.

Paradoxically, the United States, as part of its campaign to support democracy and eliminate terrorism in the Middle East, has put pressure on many Arab countries to take undemocratic, military, and security measures against certain forces, parties, elements, and groups. It demanded some governments to intervene to prevent their newspapers from criticizing the United States and to stop publishing what the American administration considers incitement to violence and hatred, especially the criticism directed by the Arab media to the aggressive Israeli policy in the region. Accordingly, the state that raises the slogans of freedom and democracy is pressing to reduce the margin of freedom of opinion and expression in the Arab world when it comes to its interests or the interests of Israel.

The conclusion is that the United States has “selectively” used democracy in the framework of American foreign policy as a mask to hide the ugly face of the United States. This is evidenced by the double standards in dealing with the values ​​of democracy, as human rights violations, corruption, and tyranny of rulers are condemned in countries that are treated as enemies, especially “rogue states”, such as Iran and North Korea, while being overlooked by friendly countries such as Israel.

The question now, especially during the Biden era which repeats the mistakes of all previous presidents, is: Do American interests determine its position from other regimes that violate human rights and democracy?