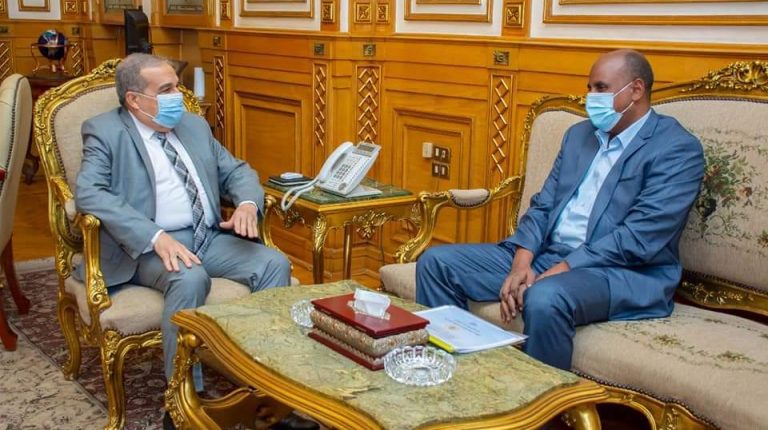 The Egyptian Minister said that this meeting also aimed at discussing financing mechanisms for contracts between the two sides.

He asserted that Egypt seeks to develop cooperation with Sudan for more spacious horizons, explaining that his ministry aims at cooperating with all companies in different fields to exchange experiences and localize modern manufacturing technologies.

The Military Production Minister has also indicated that this meeting is not the first with representatives of the Sudanese delegation, but this meeting followed a series of meetings in light of forming a joint committee from representatives from the Sudanese Defense Industries System, the Ministry of Military Production, and the Arab Organization for Industrialization.

Moreover Abu Shama had expressed his country’s appreciation for the size of cooperation relations with Egypt, stressing Sudan’s keenness to increase economic cooperation between both sides.

He asserted the organization’s interest in strengthening the strategic partnership with various authorities and companies. He added that the areas of cooperation with Egypt are not limited to the military industry but also include civilian industries, praising the efforts of the Egyptian state to provide the appropriate climate to attract foreign investments to the Egyptian market.

He stressed that Sudan’s relations with neighboring African countries can be benefited from opening the new Egyptian-Sudanese markets.

He explained that the Sudanese side’s interest in cooperating with the military production ministry comes with the aim to boost exchanging experiences and integration between the two sides, as the two sides produce the same military and civilian products.

The two sides agreed at the end of the meeting that a delegation from the Yarmouk complex affiliated with the system would visit the Egyptian companies affiliated with the Ministry of Military Production during the coming period to complete technical discussions and financial negotiations.