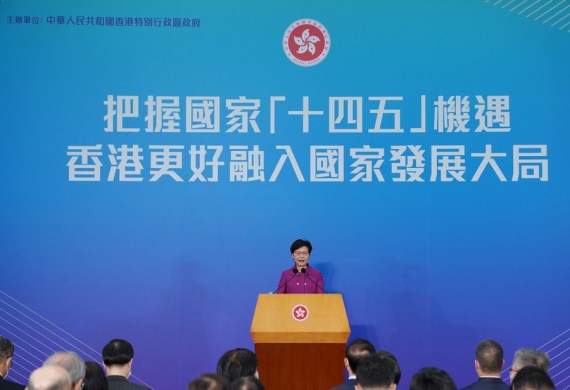 The first of a series of activities on the introduction of the outline of the 14th Five-Year Plan (2021-2025) for national socio-economic development was held here Monday, with participants discussing fresh opportunities from the national development scheme for Hong Kong to better integrate into the overall development of the country.
Chief Executive of China’s Hong Kong Special Administrative Region (HKSAR) Carrie Lam said at the event that two chapters (61 and 31) of the 14th Five-Year Plan relate specifically to Hong Kong, which fully demonstrate the central authorities’ support for the HKSAR and the importance it attaches to the well-being of the Hong Kong people.
Lam said the HKSAR government is deeply encouraged by these statements in support of Hong Kong’s efforts to consolidate and enhance its competitive advantage, which will bring vitality and once-in-a-lifetime opportunities for Hong Kong.
The chief executive emphasized the importance of the implementation of the 14th Five-Year Plan. “I have full confidence in the implementation of the 14th Five-Year Plan by the HKSAR,” she said.
“The national delegation started today a special tour here to introduce the 14th Five-Year Plan to various sectors in Hong Kong, which reflects the central authorities’ warm care and strong support for Hong Kong,” Luo Huining, director of the Liaison Office of the Central People’s Government in the HKSAR, said during his speech.
Luo shared three points of his views. First, he said, it’s important for the city to understand the requirements of the national planning and fully seize the direction of Hong Kong’s development.
Second, Hong Kong needs to integrate into the overall national development and continuously enhance its competitive advantages, Luo said.
Third, Hong Kong should make good use of the policy support granted by the central authorities to open up a new future for Hong Kong’s development, Luo pointed out.
“The 14th Five-Year Plan has once again defined the orientation of Hong Kong’s development and provided more policy support, and it is necessary for the Hong Kong society to take further actions,” he said, adding that the competition is fierce in a market economy.
“If you don’t advance, you will stay behind, and even slow progress means being left behind. The only way to win tomorrow is to do a good job today,” Luo stressed.
With even stronger national support, Hong Kong will gain more opportunities and achieve greater development in areas of financial services, digital transformation, trade, innovation and technology, and green development, Ning Jizhe, deputy head of the National Development and Reform Commission (NDRC), said when delivering a video speech.
He in particular emphasized opportunities in the development of the Guangdong-Hong Kong-Macao Greater Bay Area and the Belt and Road Initiative.
Hong Kong should play a more active role as a participant in the country’s domestic circulation and a facilitator of the “dual circulation” that allows domestic and overseas markets to reinforce each other, Ning said.
Also speaking at the event, Huang Liuquan, deputy head of the Hong Kong and Macao Affairs Office of the State Council, stressed that the outline of the 14th Five-Year Plan for national socio-economic development contains special chapters to support Hong Kong in strengthening its advantages and encourage its integration into the national development landscape.
More favorable policies are in the pipeline to benefit Hong Kong and its residents, Huang said, citing the Qianhai and Hengqin cooperation platforms under the Greater Bay Area development program, Huang said.
The policies aim to ensure that Hong Kong, like the entire country, enjoy a brighter future and that Hong Kong compatriots can lead a happier and better life, he said.
The delegation is composed of officials from central government departments including the Hong Kong and Macao Affairs Office of the State Council, the NDRC, the Ministry of Science and Technology, and the People’s Bank of China.
In the next couple of days, the delegation will visit the HKSAR Legislative Council, the Hong Kong Convention and Exhibition Center, the Open University of Hong Kong, and the Hong Kong Science Park to discuss Hong Kong’s development with lawmakers, HKSAR government officials, business people, and youth and student representatives.