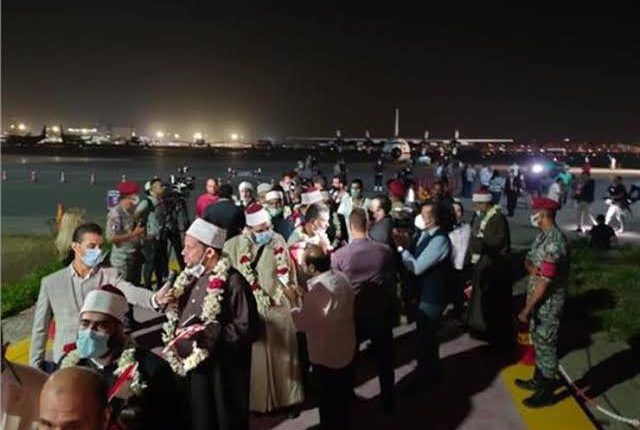 Egypt has evacuated about 40 nationalities from Afghanistan as per President Abdel-Fattah Al-Sisi’s directives, following Taliban’s takeover of the Asian country.

On Tuesday, Egypt’s Foreign Minister Sameh Shoukry received the members of the Egyptian diplomatic mission in Kabul, following their evacuation from Afghanistan.

The Egyptian Foreign Ministry is closely following all the developments in Afghanistan and taking all measures to coordinate the return of all Egyptian citizens.

After arriving in Cairo, the head of the Azhar delegation, Sheikh Shawki Abu Zaid, thanked the President for the efforts to bring the community home and for the well secured reception, as well as the medical preparations.

Abu Zaid told the local media that they suffered many obstacles in Kabul airport, and they learned that a person without a strong country behind his back would be lost.

He explained that the mission was carrying out its work until the Taliban attack on the capital Kabul and the fall of the state with all its institutions and spread of chaos.

He added that the Armed Forces had been constantly communicating with the Egyptian diplomats in Afghanistan to ensure their safe return.

After the Taliban took over Kabul, the capital of Afghanistan, there have been chaotic scenes at the capital’s airport as people desperate to flee the country crushed around access points, and a member of the Afghan security forces was killed in an isolated gunfight with unidentified attackers on Monday.

In a similar context, the director of the American Central Intelligence Agency (CIA), met with the Taliban’s top political leader in Kabul, a US official said Tuesday, according to Associated Press.

Later Tuesday, G-7 leaders plan to discuss the crisis in Afghanistan, as Europe is calling the U.S. to consider delaying its withdrawal to allow more time to evacuate those desperate to leave.