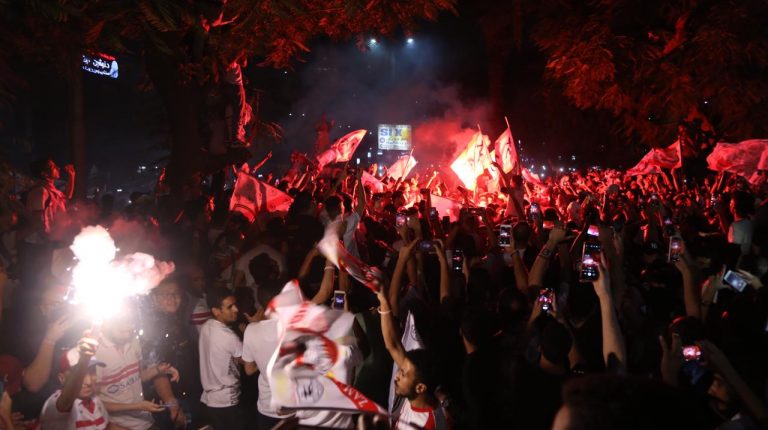 Zamalek SC were crowned 2020-21 Egyptian Premier League champions, after their 2-0 win over El Entag El Harby SC on Tuesday guaranteed them the trophy and stopped their arch-rivals Al Ahly’s five-season dominance of the competition.

Hundreds of Zamalek fans gathered at the club’s headquarters in the Mohandessin neighbourhood to celebrate the 13th league title after a long season full of challenges, as the title race lasted until the 33rd Gameweek (the penultimate round) between Al Ahly and Zamalek.

Zamalek captain Mahmoud Abdel Razek (Shikabala) was at the centre of celebrations at the stadium after the team’s game against El Entag El Harby and on social networking sites.

Zamalek collected 79 points from 33 matches, including 24 wins, 7 draws, and 2 defeats. The champions scored 60 goals and conceded 20.

On the other hand, Al Ahly shared points with El-Gouna after a 3-3 draw on Tuesday at the Khaled Bishara Stadium in Hurghada. Mohamed Naguib scored the opener for El-Gouna, and then Ali Maaloul drew for Al Ahly from the spot. Hussein Al-Shahat scored the second goal for Al Ahly, before Mohamed Sharif – who won the Golden Boot – netted the third at 81 minute. However, El-Shabrawy and Omar El-Saeed’s late strikes secured an astonishing comeback for the hosts.

He also led Zamalek to the CAF Champions League semis before announcing his departure from the club before the team’s difficult match against Raja Casablanca.

Portuguese coach Jaime Pacheco took over and led Zamalek to the competition’s final but they lost the African title to Al Ahly in the dying minutes of the game.

The decision to re-sign Carteron caused much controversy between Zamalek fans and they were divided over the decision. With this league title, Carteron regained the confidence of the Zamalek fans.

In his second term, Carteron’s was unsuccessful, as Zamalek failed to qualify for CAF Champions League quarter-finals. However, his start in the Premier League was strong, with a series of successive victories that outweighed his hand in winning the title at the expense of Al Ahly.

Carteron won three trophies with Zamalek, of which the most precious was the league due to the difficulty of the competition.

Carteron will be under great pressure in the coming season, especially since the White Knight fans are expecting him to compete for the African title, which the team last won in 2003.

Moroccan forward Achraf Bencharki continued his brilliant performance with Zamalek, and led the team to win the league title.

He had a distinguished season in both the league and cup competitions, becoming the team’s top scorer with 15 goals, in addition to 6 assists.

Bencharki became the main star of Zamalek because of his astonishing footwork and great contributions to the team’s victories, especially after the recent departure of the team’s former star Ferjani Sassi.

Zamalek’s normalisation committee, headed by Hussein Labib, is scheduled to hold a meeting with Bencharki in the coming period to extend his contract with the team.

Ahmed Sayed, commonly known as Zizo, has been one of the most successful players in Zamalek in recent years.

He succeeded in securing a permanent place in the squad with Zamalek’s different coaches in the past two years, due to his distinguished technical capabilities and high physicality.

Zamalek’s administration succeeded, during June, in extending Zizo’s contract until 2025.

Zizo has distinguished records in the league this season, as he scored nine goals, becoming the third highest scorer in Zamalek following Bencharki and Youssef Ibrahim, nicknamed Obama.

Since joining Zamalek, Zizo achieved five trophies: the African Confederation Cup and Egypt Cup in 2019, the Egyptian and African Super Cups in 2020, and the league in 2021.