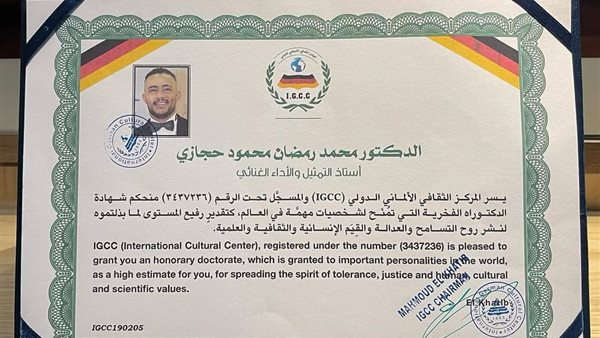 The German International Cultural Center in Lebanon stated, on Friday, that it withdrew its honorary doctorate from the Egyptian actor Mohamed Ramadan.

The centre apologised to the Egyptians for the controversy erupted due to the award, asserting, “We did not know about the unfortunate incident of the Egyptian pilot, which we condemn and denounce, as well as Ramadan’s taking pictures with a Zionist singer that we condemn too, and therefore the doctorate was withdrawn from him.”

An Egyptian pilot was banned for life after allowing Ramadan into the cockpit during a private flight. Ramadan bragged about the incident and shared a video to his 10 million online followers sitting in the pilot’s seat.

Ramadan had received an honorary doctorate from the German Cultural Center in Beirut, leading the German Embassy in Cairo to issue a statement denying any relation with the centre.

The German Embassy in Cairo said on its official Facebook account, “We are always flattered to see the amount of people that like the word ‘German’, but keep in mind that not all institutions or companies that offer or use the word ‘Germany/German’ are approved and affiliated with the German government. There is no connection between the German government and the so-called German Cultural Center in Lebanon.”

The German Embassy’s statement came after Ramadan posted a set of photos of him while receiving the honorary doctorate, commenting: “Thank you, Your Excellency, the Lebanese Minister of Culture, the President of the Musicians Syndicate and the Lebanese Actors Syndicate, for granting me an honorary doctorate in acting and singing, and thank you to the German Cultural Center in Lebanon for granting me the title of “Arab Youth Ambassador.”

The honorary doctorate is an honorary degree given without a doctoral thesis in appreciation of the achievements of personalities in certain fields and the holder cannot work with them.

The Actors Syndicate in Lebanon said it is important for the Syndicate to clarify to the Lebanese, Egyptian, and Arab public opinion that it did not participate in honouring the actor, and it has no authority to grant the title of ambassador to any actor.