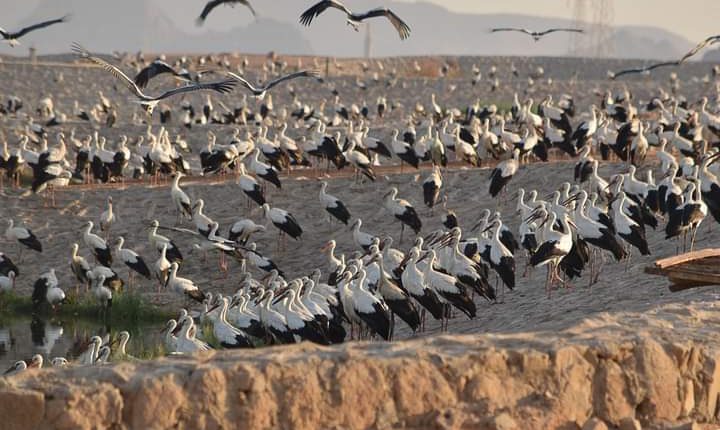 Egypt’s Minister of Environment Yasmine Fouad announced, on Sunday, that the Sinai Protected Area monitored the first flocks of migratory birds in their annual journey during the fall season heading from Europe and Asia where the weather is cold to the warm weather in South Africa.

Egypt is the second most important corridor for bird migration in the world.

Fouad added that large groups of white storks were monitored in the protected areas of Ras Mohamed and the oxidation lakes in Sharm El Sheikh, where the birds used to take oxidation lakes as their stop, especially with the ministry’s efforts to develop and rehabilitate them to receive the birds to rest and feed before completing their journey.

The Minister of Environment explained that the continued landing of the white stork in its usual stations in the reserves of South Sinai confirms the integrity of the ecosystem and the success of the ministry’s efforts to develop reserves and preserve their biological diversity and natural resources.

She further pointed out that the South Sinai reserves examined the groups of birds that were monitored, as it was found that there are numbering rings on the legs of these birds belonging to international associations and organisations, who are interested in migratory birds.

Numbering rings are used by the concerned groups to follow and monitor the path of the migratory birds and the risks they are exposed to during their migration journey to know the climatic and environmental conditions in the countries of Africa and Europe, by analysing the numbers of deaths during the migration seasons.

In Egypt, the white stork is called “the goat”, due to its large size, and its weight which ranges between 3-4 kg and its length is about a meter. The bird’s legs are long, its feathers are white, and the ends of the tips of its wings are black, while its beak is red and is one of the strong birds.

This bird does not pass the Mediterranean during its migration journey from Europe, because it needs thermal currents that do not form through the sea, and during its movement on land it walks slowly and its flocks are usually monitored in Egypt during August and September.