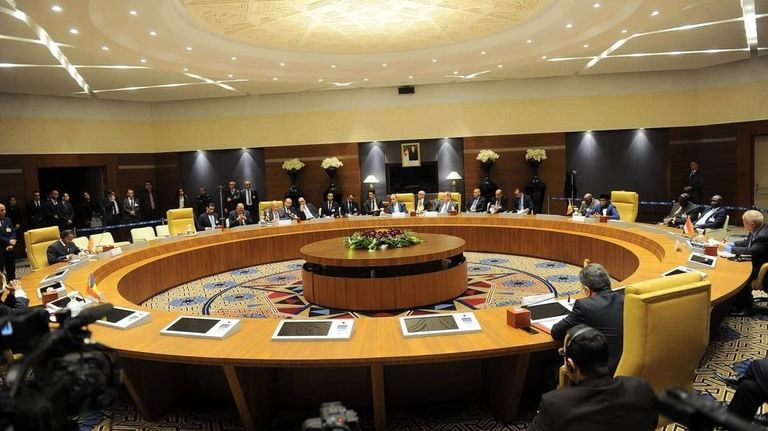 The meeting of foreign ministers of Libya’s neighbouringcountries, held in Algeria on 30-31 August, stressed the necessity of reaching a political solution to the Libyan crisis, enhancing support for efforts to achieve stability, and ending the presence offoreign forces and mercenaries in the country.

In his opening speech at the meeting, Minister of Foreign Affairs of Algeria Ramtane Lamamra said the solution to the Libyan crisis can only be through a Libyan-Libyan path with the support of the international community.

He added that the path of reconciliation in Libya “requires continuing the effort to complete the unification of the institutions of the Libyan state, to achieve reconciliation, and to continue working to withdraw the mercenaries and foreign forces from all Libyan soil.”

He pointed out that there are countries that seek to exploit Libyan soil to achieve their interests.

He continued, “It is necessary to work to withdraw mercenaries and foreign forces from Libya as soon as possible.”

Egypt’s Minister of Foreign Affairs Sameh Shoukry stressed the need to strengthen all efforts aimed at achieving a comprehensive political settlement of the situation in Libya. This leads to the consolidation of the pillars of the Libyan state and the unification of its various national institutions in accordance with the road map.

Shoukry stressed the need to work with neighbouring countries to help Libya restore its stability and preserve its capabilities for the benefit of the Libyan people.

The Minister of Foreign Affairs reiterated Egypt’s position calling for the withdrawal of foreign forces from Libyan lands, dealing with the militia issue, and strengthening stability and state institutions

UN Envoy to Libya Jan Kubis affirmed that all parties committed themselves to hold the long-awaited Libyan elections scheduled for 24 December.

“We hope that the constitutional rule will be approved in the coming days so that we can hold the elections,” he added.

He pointed out, “The continued presence of mercenaries and foreign forces is a cause for concern to Libya and neighbouring countries.”

With regard to the Libyan elections, the UN official said: “The presence of regional and international observers for the elections is very necessary, and the approval of the suspended budget is very important to support the government’s efforts.”

For his part, Ahmed Aboul Gheit, Secretary-General of the Arab League, said that the League sees great importance in the consensus of the Libyan parties, and that it encourages all Libyan parties to move from competition to consensus, and the League also encourages them to overcome legal, constitutional and logistical obstacles.

Aboul Gheit added that the departure of mercenaries and foreign forces from Libya is essential in the transition process, and that this departure must take place taking into account the neighbouring countries, stressing the necessity of unifying the Libyan institutions, especially the military.